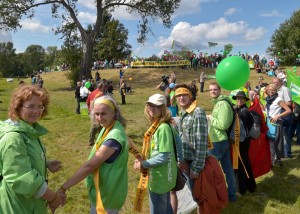 Chocking on tears, the owner of Campsite Deulo haltingly greeted 300 activists standing by the camp’s lake, which the “leftist” regional Brandenburg government of Social Democrats (SPD) and socialist The Left (Die Linke) (1) seek to destroy, along with 3000 people’s homes, businesses, farms, forests, water, even churches and graveyards in the Lausitz area.

Instead, The Left will offer progress: five dirty brown coal strip mines and five energy processing plants, and on the other side of the border in Poland a similar number of people’s lives will be uprooted and relocated as six mines take over their homeland.

Silently we walked from pine wooded nature to our buses to join with 7000 other concerned people from 22 countries to form an eight kilometre-long human chain from the German border Kerkwitz church, with some wading into the Neisse River, to join with those on the Grabice, Poland side.

For half-an-hour, on August 23, we transmitted our energy, singing our slogans:

The German and Swedish national media, and some international media, covered our action. We came from local resistance groups (2), Greenpeace, Friends of the Earth, Germany, Anti-Atom Berlin, Campact, and several other environmental organizations. Most of the 7500 were Germans from many parts of the country. Our numbers were greater than the expected 5-6000 from 14 countries.

This process of destroying tens of thousands of lives for the dirtiest of all fossil fuels has been going on for a long time in this region and in a few others. In a century’s time, 135 villages have been devastated. In recent years many European governments, including Germany, have decided to reduce fossil fuels by 40% by 2020 and up to 90 (even 100%) by 2050. Neverthless, there has been an increase in the destruction of villages for the benefits of cheap dirty lignite (brown coal). Lignite is saturated with water and can not be shipped like hard coal. It emits many harmful chemicals, including CO2 and mercury.

A Greenpeace study concluded that just one nearby plant, Jänschwalde, has caused 300 premature deaths due to respiratory diseases and cancers. Before conducting our human chain, we saw this most harmful plant in Germany. Its 4.513 hectares exudes black death. Lignite looks like ashes, reminding one of cremated bodies. The smoke stacks spew forth smoke non-stop. This plant is one of three recently built alongside five mines. Its 25 million tons of CO2 emissions annually—one ton of brown coal equals one ton of CO2—is half of what Sweden sends into the atmosphere and water annually. Sweden’s state owns Vattenfall company. A Vattenfall leader was heard to say, “what is dirty is cheap”, and therefore profitable, recounted someone in his presence.

Poland’s PGE energy company will be digging six mines. Poland relies on dirty coal-fired plants for 90% of its energy while Germany’s percentage is 23. Poland’s Prime Minister Donald Tusk backs the new Gubin-Broady strip mining. Actions against it “only serve to spur on the economic stagnation of our country”, said Ryszard Kosciesza, a coal project leader.

The existing plants and mines will be operating for another 20 years. Those planned will extract 1.2 billion tons of lignite and will run long past the 2050 deadline. And once mines are closed, the earth cannot be used for decades, even centuries. The ground water is thoroughly contaminated.

”The very future of our energy supply in Europe depends on whether we can stop climate change in the Lausitz region,” writes Greenpeace in Sweden, a campaign coordinator to actions. “For decades huge bucket wheel excavators have been mining this coal…each new strip mine is an attack on the energy revolution. Climate protection is impossible if we don’t phase out coal.”

The UN has called an emergency summit of world leaders in New York to discuss action about climate change, and has invited environmental groups. On this occasion, September 21, people from thousands of organisations from unions to faith groups, Avaaz and hundreds of thousands of people already signed up will launch the biggest climate change mobilisation in history, with marches from New York to Paris to Rio.

There will soon be regional elections in Germany and Poland, and many are organizing against the expansion of brown coal mines and plants to convince political parties to put an end to destroying Mother Earth.

Environmental groups might be conducting regular actions throughout Europe in front of Swedish embassies to protest brown coal mining.

1. Brandenburg Die Linke recently reversed its anti-coal position, contradicting national Die Linke’s stand. In the last regional elections it won 30% of the votes and rules with the SPD, which took 35% of the votes. Apparently, Die Linke, which was pro-socialist, anti-capitalist and against imperial wars, has capitulated to what it sees as acquiring more votes from some sectors of the working class, including miners. Ironically, traditional capitalist parties consider Die Linke to be extreme left. As we formed a human chain across the borders, a score of German Greenpeace activists formed a human chain at the press conference held by Die Linke to announce its candidates for the upcoming regional elections.

Another sad irony in modern politics is that while the Green party is the only party backing environmental groups demand an end to coal mining, it is a war party. Wars, naturally, are a tremendous cause of pollution to Mother Earth. The Greens went from their original pacifist stance of opposing nuclear power, NATO military actions and wars to backing the wars against Afghanistan, Yugoslavia, Libya, and now support fascist Svoboda in Ukraine and want western military action against Syria.

All environmentalists must recognize the dichotomy of trying to protect nature without opposing wars that destroy it as well as humans. For supportive evidence of how much militarization of the world (US has 800 military bases in the world), and the numerous wars, pollute the earth see my piece from the 35,000 strong peoples´ climate conference in Bolivia and backed by its indigenous-led government: http://www.ronridenour.com/articles/2010/0515–rr.htm

We adopted the following resolution:

“Capitalism responds through militarization, repression and war to the resistance of the people. It requires a potent military industry, the militarization of societies and war as conditions necessary for its process of accumulation as well as for its control over territories, mineral and energy resources, and to suppress the struggles of the people. Wars, through their direct impact on the environment (massive consumption of combustible fossil fuels, oil spills, GHG emissions, impoverished uranium contamination, white phosphorus, etc.) have become one of the primary destroyers of Mother Earth.”

2. Most of the people forced off their lands are minority indigenous peoples: German speaking Wends and Slavic speaking Sorbs. These peoples have been discriminated against for centuries, and the Nazis oppressed the Sorbs. Since World War 11 both peoples are formally protected under UN law, however this does not stop the German and Polish governments from relocating them in mass. Ironically Wends/Sorbs means, “dwellers in watery, swampy regions” which are constantly being filled in for lignite mining.