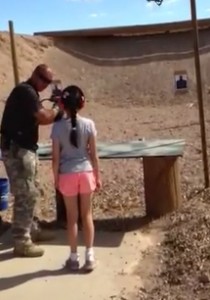 You’ve probably heard that a nine year-old girl just killed her gun instructor, Charles Vacca, with an Israeli Uzi sub-machine gun the Zionists use to kill Palestinians and other Arabs. We all know that US Americans are crazy about their guns but, really, a nine-year girl in pink shorts and pink earmuffs taking gun lessons in the Mojave Desert in Arizona?

The unnamed girl was on vacation with her parents from New Jersey. They thought this was a fun tourist thing to do so they filmed their daughter getting instructions from the shooting range instructor, a former US sergeant. As the girl squeezed the trigger after instructions, she ended up killing him, unintentionally. The local sheriffs chalked the incident up as an “industrial accident”, and then released the video on You Tube, for Christ’s

The Last Stop shooting range, run by Bullets and Burgers , is one of between 18 and 20,000 outdoor and indoor places to learn and practice shooting skills. B&B advertises itself for having “the best hamburgers you have ever eaten” while firing automatic weapons with names such as: Desert Eagles, Terminator, Rambo II, and the girl’s favourite, the cool, light Uzi.

B&B’s website makes it clear that they operate “in accordance with national guidelines”, which prohibit the use of firearms for human beings under eight years of age. Thank God for that. And, of course, “everything is under control”.

Here is a taste of how “everything is under control” proceeded, according to Denis Hamil.

“First Vacca showed her how to shoot the Uzi in a single-shot mode. ‘Allll riiiight,’ shouts Vacca, wearing camouflage gear and dark shades.

“’All right, full auto,’ he then says, switching the Uzi submachine gun into the automatic mode Arnold Schwarzenegger uses when he blazes through an action flick.

“But the girl was no  Arnold. And when she fired the Uzi with her skinny little arms the recoil racked the machine gun upward and to the left as the muzzle flamed. A bullet entered Vacca’s head. He was airlifted to a local hospital but tragically died that night.”

Here come some statistics on how crazy US Americans are with their pet guns. I found all this from several business and government sources.

Police murder an additional 5000 civilians annually; the majority are black and Latinos. A black man is murdered by police every 28 hours. Currently, there is a national outrage over the murder of a black teenager in Ferguson, Missouri. Police enjoy total impunity. Protect and Serve is their motto.

Now while that is a lot of guns and damage, it is nothing to what the United States government manages every day by its military with 800 bases around the world and its numerous wars every year.

According to the Stockholm International Peace Research Institute (SIPRI), the US spent $640 billion in 2013 on armaments; the entire world’s expenses were $1.7 trillion. Seven of the top ten arms manufacturers are US-owned multi-nationals. Their take is half a trillion dollars, and the seven firms employs nearly one million people. Almost one-half of the federal budget is spent on past and contemporary wars, future ones too. This includes daily costs for its military of one million men/women, and for 25 million veterans’ pensions and health care.

One of the US’s banana republics is Denmark. Before 9/ll, Denmark had one arms company, Terma, which didn’t produce arms per se but communication systems, such as radar, for both Danish and US military purposes.

Now, there are 25 “members” of the arms branch, according to Berlinske Tidende, January 11, 2013. They are companies that the Defense and Aerospace industry (FAD) uses for joining in with US’s wars since 9/11. It is a 1.5 billion kroner (about $3 billion) industry employing 1,500 workers. This progress is, in large part, due to the former prime minister and NATO general secretary Anders Fogh Rasmussen. As reported by some media these days, Denmark owes this to his consistent lies about Iraq, in compliance with his buddy Bush.

While FAD has a long way to go to catch up with the US government, all the political parties in the parliament (Folketinget) are doing what they can. This includes the so-called red or socialist parties SF (Socialist Folkepartiet) and EL (Enhedslisten or Red/Green party).

Red/Green was founded soon after the fall of the Berlin Wall by old-time Moscow communists, some Trotskyists and the then independent left socialists. It stood for revolution, socialism, opposition to capitalism and imperialism, and its wars. Since its accomplice role began with the neo-liberal Social Democrats (around 2007-8), it abandoned the anti-war movement. It then evolved to support the subsequent “red” coalition government by voting for annual finance budgets based on economic capitalism, including many billions of kroner for capitalism’s military institutions and various wars in cahoots with the US government.

Its first direct war betrayal came in 2011 when EL politicians voted with all the capitalist parties to support US/NATO bombing of Libya, which caused the destruction of an effective social-economic infra-structure that benefited all the people. EL’s leadership claimed that the other parties promised not to take the invasion beyond patrolling a no-fly zone for Libyan planes that never took off. But, of course, nobody kept that promise.

When nearly half of its membership objected, the leadership withdrew from the “coalition of the willing” but stubbornly resisted learning anything decent.

Now with the war in Iraq resuming, Red/Green again has voted with the capitalist parties to provide weaponry to the Iraqi puppet government, mainly in the Kurdish area where one of the US/EU/NATO terrorist groups, PKK, operate. EL has again failed to learn not to trust what has become its permanent warring allies. EL has just voted with a unanimous juggernaut parliament to send to Iraqi authorities a US-manufactured C-130 Hercules aircraft, which Denmark bought from its big daddy. It is to be loaded with armaments and 50 men.

Oh, but there is a postscript. Red/Green leaders assure us that its capitalist allies have promised that they will not expand the war beyond this modest assistance. But, God forbid, if the occasion were to arise, they will surely take the matter up in the parliament.