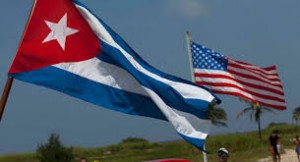 The United States of America, the global policeman, is “changing its relationship with the people of Cuba”, as President Barack Obama put it. With this announcement of a resumption of diplomatic relations after John F. Kennedy severed them January 1, 1961 we need to evaluate what is behind it and what is positive and negative.

I feel compelled to spell out my take on this new policy after having Cuba in my heart for five decades, from the day of my first protest during the Bay of Pigs invasion, April 1961, and after living there and working for the Cuban government from1987 to 1996. (1)

1. The brave, patriotic Cuban Five are freed from US torture chambers and reunited with their loved ones in their own country.

2. Obama inadvertently admitted that Cuba is not a terrorist state when he instructed Secretary of State John Kerry, a former war criminal in Vietnam turned repentant, to reconsider the US designation of Cuba as a “state sponsor of terror”. While the US knows that Cuba has never supported terrorism nor has it conducted such, the US is clearly THE terrorist state of the times.

3. Obama also inadvertently admitted that Cuba does not torture its people, including prisoners, as does the US, when he said that “no Cubans should face harassment or arrest or beatings”. These measures do not constitute torture, even if Cuban authorities have harassed or beaten some people. It can be argued that this is wrong but it is not torture. Just days before Obama’s speech, on December 17, the Senate issued a partial report on how the CIA has tortured people in many countries, including at the US military base on Cuban territory at Guantánamo, on land it stole from Cuba in 1898, and yet no one is to be held accountable. Just imagine reversing this reality. Imagine that Cuba stole land from the US and placed a military base on it and then brought people there from several countries without any judicial process, held them confined for years without recourse and tortured them consistently.

Beatings at US “blacks sites”, as they called them, or at rendition secret jails in countries the US now wars against (Syria and Libya), was kids play. These leaders of democracy and human rights rammed broomsticks up rectums, used water boarding or near drowning, sexual/rape abuse in many ways including tearing rectums apart, forced sleep deprivation for several days, shackling hands over heads without touching the ground for days, constant loud noises, threatened torture and murder of prisoners’ children and parents…And that is what is admitted.

The US has continually accused Cuba of torturing its people, and yet has never come up with evidence. Yet it has tortured hundreds of thousands of human beings, including in its own prisoners, for two centuries? The US even conducts torture training to LatinAmerican military personnel at a military base at Fort Bragg, Georgia, the School of the Americas.

1. The US government realizes that the socialist revolution in Cuba is dead. Its people are fed up with empty revolutionary sloganeering from the bureaucracy. The vast majority of the people are so disheartened with the lack of real socialism, implying real participatory democracy, that what they seek is what most people in the world of disillusion wish for: consumerism and every man/woman for him/her self. So Obama can coolly state: “I am convinced that through a policy of engagement, we can more effectively stand up for our values and help the Cuba people help themselves as they move into the 21st century.”

2. US capitalists wish to end the blockade so that they can earn profits. Rockefeller and many other major and middle capitalists have long conducted an association that seeks an end to the blockade.

3. The Cuban bureaucratic government also seeks an end to the blockade so that it can continue to avoid advancing the permanent revolution set in motion in the early days, which would require implementing true decision-making by the people, and ownership of the economy by those who produce and those who serve, thereby gradually eliminating an elitist leadership.

4. Cuba is on the run backwards to capitalism, even neo-liberalism. What can be expected with this change of US policy is that Cuba will continue in reverse, begging for trade with capitalist-imperialist-warmongering US corporations and their government. A true socialist program both within Cuba and within the already stifled ALBA alliance (Cuba, Venezuela, Bolivia, Ecuador, Nicaragua and three Caribbean island states) is basically trashed.

“Normalization is a result of US corporations seeking profit opportunities in Cuba, such as developing broadband Internet markets.” With normalization “comes American money and a US Embassy. The American money will take over the Cuban economy. The embassy will be a home for CIA operatives to subvert the Cuban government. The embassy will provide a base from which the US can establish NGOs whose gullible members can be called to street protest at the right time…Normalization of relations means regime change in Cuba.”

That comes from a former US government assistant secretary of the treasury. And that is what Cuban solidarity folk should be worried about instead of calling upon Cuban supporters to give thanks to Obama, the leader of the greatest terrorist state in the history of humanity.

(1) See my CV and books about Cuba

See my CV and books about Cuba ,
and my analyses of Cuba at ronridenour.com

By Ron Ridenour What a day! For me, it started END_OF_DOCUMENT_TOKEN_TO_BE_REPLACED