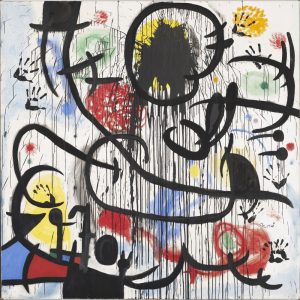 I’m no art critic or connoisseur but “I know what I like”. For instance, cutting a hole in a canvas and having it placed in the gaudy Guggenheim Museum in Bilbao is Yoko Ono’s idea of “art” while I view it as a kindergarten child’s play. But what can you expect from such as Solomon Guggenheim, born into wealth and owner of the Alaskan Yukon Gold Company. Today, the company’s in situ value in gold, silver, zinc, lead and copper is around $700 million. http://www.24hgold.com/english/company-gold-silver-yukon-gold-corporation.aspx?id=16918558E6680&market=YGDC.OB

This gigantic museum’s titanium-clad, steel architecture is built to make commoners feel small, so I think although a psychologist would probably categorize me as an insecure-paranoid. Being at Guggenheim’s monster made me feel anger down to my gonads, anger at what the Guggenheims and Rothschilds’ (Solomon married into this wealthy banking family) economic system does against us. The Guggenheim Museum, however, has some art worthy of my praise, such as Basque nationalist Eduardo Chillida and Robert Motherwell’s Eligies for the Spanish Republic.

Speaking of gaudy that was the term that came to mind when I first saw Cornet Gaudi’s works in Barcelona, especially the “Sagrada Family” church—which the oppressive and richest institution in the world, the Catholic Church, begs the public to pay for.

Art can inspire my sense of beauty and creativity, as it must for all, but especially when it speaks for justice, for what is good for humanity, for all life forms, its ability to teach us purpose. I have in mind artists such as Picasso, his friends Miró, Henri Matisse, George Braque; and Chillida, Goya (Disasters of War), Diego Rivera, Van Gogh, Natalie Goncharova, and others we saw in these marvelous Spanish museums. We spent several days in museums in Malaga, Barcelona and Madrid.

In Picasso’s Malaga home-museum and two others there devoted to his works (plus a library about him), we saw how his middle-class family lived, and many of young Picasso’s etchings, paintings, ceramics, and learned the significance of doves for him and his art professor-painter father, José Ruiz Blasco.

When Pablo was just 11, he painted doves to please his father whose eyesight was failing. For some reason doves live in droves in Malaga. Besides the natural pleasure of viewing them, the Picasso’s saw harmony in their behavior, aggression as well.

Picasso left Spain to live in Paris when 23, in 1904. He never lived in Spain again, although he visited before the Spanish Civil War started. From France, Picasso supported the Republic. His first political statement concerned the fascists “plunging Spain into an ocean of misery and death.”

When Franco organized the takeover of the Basque Country, he sought air raids from Germany and Italy. They were glad to assist—good training for terror bombings in the upcoming world war. The Guernica massacre took place on April 26, 1937. Three-fourths of the village was destroyed during three hours of constant bombings (30 tons, 6000 bombs). Most of the rest of the city was damaged except the wealthy areas, the town assembly hall, the revered Gernika Tree, and the two weapons factories, which Franco would use when his troops came three days later.

The Spanish Republic commissioned Picasso (without pay) to make what became the most famous of paintings, the 8-meter long Guernica, which was displayed first at the World Fair in Paris, July 1937. The New York Museum of Modern Art kept it safe throughout the war and turned it over to the Reina Sofía Museum in Madrid, in 1981.

We stood before “Guernica” alongside people from around the world. My emotions were strong and mixed: joy for the symbolism of solidarity it represents, and tears of sorrow for the tragedy and excruciating pain people felt, the wanton murder simply for the boundlessly inane desire for power and material wealth. And it continues. Today the “democratic” states commit their terror bombings. 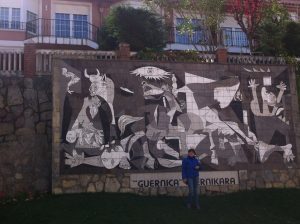 This is a Picasso copy placed on a wall near the Town Assembly House in Gernika. Jette stands before it.

Picasso joined the French Communist Party, in 1944, right after Paris had been liberated from the Nazis. “I have found there all whom I respect most, the greatest thinkers, the greatest poets and all the faces of the resistance fighters.” But Picasso was not cowed by atrocities regardless of where they come from and criticized Stalin, yet he remained a CP member until his death.

A leading communist, poet-author, Luis Aragon, asked Picasso to contribute a painting for a poster to support the World Conference for Peace to be held in Paris, April 1949. Aragon thought of using a dove as a symbol for justice, a bearer of messages for peace. Matisse had recently given his friend a few Milanese pigeons, and Picasso made a lithograph of one. Aragon came across it when browsing through sketches, so wrote one of Pablo’s lovers, artist Francoise Gilot, in her 1964 book, “Life with Picasso.” She is still alive at age 95, and the pigeon is still the world’s peace dove.

Jette used a Picasso peace dove for the logo of “Tid Til Fred—Aktiv Mod Krig” (Time for Peace—Active Against War.) 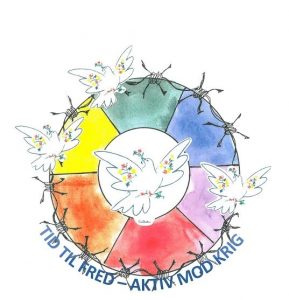 Coordinators paid an unsolicited copyright fee to the Danish copyright association, which I am certain Picasso would have opposed as ludicrous and an insult to his engagement for peace.

Joan Miró’s “Mayo 1968” located at Barcelona’s Fundació de Miró, is one of my favorites. He began it at 75 and finished five years later, 1973. The colors and energy reflect that of millions of students and workers (2/3 of the work force) on wildcat strike throughout much of France. They brought the economy to a halt. (Much of Europe was also in uproar, and we students in the US were protesting for freedoms and against the war in Southeast Asia. In Mexico City, the government killed hundreds of protestors.) After a month of anti-capitalist, anti-war, near revolutionary struggle, the French Communist Party and union leaders under its influence called on students and workers to accept a bourgeois government compromise so that capitalism could continue.

Joan Miró’s “Mayo 1968” is a tribute to striking students in France 1968. The black hand-print is thought to recognize solidarity with pre-historic hominoid cave painters, which can be seen in some caves in France and Spain.

(1) See Randy’s piece: http://www.counterpunch.org/2012/07/20/when-i-started-hating-america/
Regarding American Exceptionalism, John Pilger referred to President Barak Obama’s exclamation: “I believe in American exceptionalism with every fiber of my being”. This is what Pilger meant when he wrote, “American political life is a cultish extremism that approaches fascism.” See his piece, “The Issue is not Trump, it is us” https://www.counterpunch.org/2017/01/17/the-issue-is-not-trump-it-is-us/

(2) “How many Muslim countries has the U.S. bombed or occupied since 1980?” wrote Glenn Greenwald, November 6, 2014.Greenwald cited former army colonel Andrew Bacevich, who wrote that Syria had become at least the 14th country in the Islamic world that US forces had invaded, occupied and/or bombed, and in which US forces killed and/or were killed. And that was just since 1980. https://www.washingtonpost.com/opinions/even-if-we-defeat-the-islamic-state-well-still-lose-the-bigger-war/2014/10/03/e8c0585e-4353-11e4-b47c-f5889e061e5f_story.html?utm_term=.b8ff8d252546

Nobel peace prize winner President Barak Obama, the hope of black and “progressive” Americans whom Colonel Bacevich supported in his first election, bombed seven Muslim countries plus Muslim areas of Philippines. Obama was the fourth consecutive US president to bomb Iraq. Look up on the internet for a “list of wars involving Spain.” It should not be surprising that “chickens come home to roost”.

(3) Fuengirola is said to have acquired its name after the Arabs were overthrown by Spanish Christians. Moors had called the town Sohail. The river flowing through the town, which empties into the Mediterranean, was once navigable and used especially by fishers. The hub of a boat is called a nave, as is the central passage of churches. The Spanish word for nave is “girola”. The Christians were mainly farmers and fishers and they went to church a lot. It became common to say that one went to fish on the river. The past tense of “to go” in Spanish is “fue”. So, one could say, “fue a girola”—I navigated the river or: gone fishing.

(4) In April municipal elections pro- monarchists received 25.6% of the vote; the rest were for a republic. In general elections, 70% of those eligible voted, considered high. At that time, however, women were denied the vote, although ironically they could run for office. The republican constitution of December 1931 granted the right to vote, and many other equal rights. Of the 34 political parties that won over 1% of the vote and thereby a seat in the 473-seat parliament, outright monarchist parties only received 10 seats; and rightist parties won 20 seats. The republican and socialist coalition won a huge victory with 34% of votes (193 seats), while the social democratic PSOE took 14% (80 seats).

(6) The Soviet Union provided military assistance at the cost of all the Republic’s gold reserves. It sent old equipment no match for the more modern axis weapons: 1000-2000 artillery pieces, out-dated rifles, 350 tanks and 600-800 planes. Their 2000-3000 soldiers were mostly volunteers, advisors and secret service personnel. Mexico was the only other country to help the Republic. It provided about $2 million in aid, which included 20,000 rifles. It was also offered sanctuary for about 50,000 refugees after the Republic fell. But the European democracies and the US declared neutrality and didn’t even offer returning internationalists safety. Some were imprisoned in their home countries.

(8) See: http://whc.unesco.org/en/list/989, and one of the best books on the subject “Illustrated Guide to Atapuerca”, written by a team of experts, Atapuerca Research Team, EIA. More material can be bought at the Burgos Museum of Human Evolution and the Atapuerca Foundation and Reception Centre. See Scientific Report, 7 for study on cannibalism: https://www.nature.com/articles/srep44707

(9) As I edit this work for the last time, scientists just discovered that Homo sapiens are 100,000 older than believed until June 2017, around 315,000 years old. One skull, one complete mandible with teeth, and many other bones of five individuals who died about the same time were uncovered in Morocco (Jebel Irhoud) far from the other earliest evidence of modern man. “We did not evolve from a single ‘cradle of mankind’ somewhere in East Africa,” declared Philipp Gunz, one of the discoverers. They looked like us; they made complex tools, including wooden handled spears and cooked their food. With this find, Homo sapiens are older than Neanderthals—for the moment. See Nature international journal of science, and major newspaper articles, June 7.

(10) DNA=deoxyribonucleic acid, which is the hereditary material in cells, which is our basic building blocks.

(11) UNHCR (United Nations High Commissioner for Refugees) reported that there are more people fleeing their home lands (including refugee and asylum seekers) today than since World War II: 65.3 million. Only six percent attempt to come to Europe. Europe received 1.1 million asylum applications in 2016. In 2014, 57 people drowned on their way to Europe; in 2015, 1,855; in 2016, over 5,000 drowned in the Mediterranean Sea. In one week in May 2016, 880 drowned en route. Most European nations and the EU commission seek to stop anyone from aiding them. Greece, Denmark and Hungry fine or imprison people for doing so.