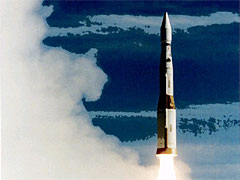 This month of October presents us with 13 years of permanent war for profit or, as the warmongers call it, the “war against terror”. This “operation” is killing and maiming millions of people especially in the oil rich Middle East. Simultaneously these Juggernaut nations “of the willing” are choking Mother Earth to death—polluting the air we breathe, the water we drink, the soil that spawns our food, and eradicating millions of species.

Most people are clearly aware that the main cause of climate change, which is destroying the planet, is human motivated. And many are acting against this. But most environmental organizations and activists ignore the wars that kill people while they pollute the planet.

People in the east and south are usually the major victims of the wars started or backed by the west, and they want no part of this violence. Most people in the west, however, are not upset enough about this warring to act against it, although when asked most acknowledge that they wish for peace. A minority in the warring countries does speak out and a few act against this permanent state of war.

The Danish Peace Watch (Fredsvagten) is made of such moral fiber. For thirteen years since October 19, 2001, these few dedicated pacifists have stood before the castle of war (Christiansborg) decrying that War is Terror. They took up their peace torch on the day that the Danish government bowed before its self-appointed superior in Washington and sent a corvette warship to assist US and UK bombing of Afghanistan.

(George Bush had ordered the Taleban government to extradite Osmana bin Laden/Al Qaeda for being behind the 9/11 terror attacks. Taleban asked the US for evidence of guilt. The US refused, and bombed the government out of office. The US then set CIA agent Hamid Karzai in as president under US scrutiny.) 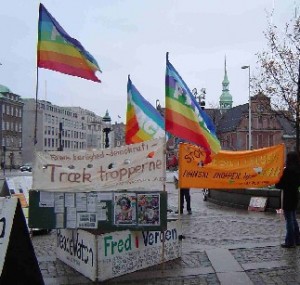 We need more peace watchers. And we need to unite the movements against war and against environmental death. They are naturally joined given that the main cause of these miseries is the same: PROFIT and POWER GREED; and the consequences are the same: DEATH to humans and any and all other species.

Listen to what Bolivian President Evo Morales says about the causes in his “10 Commandments to Save the Planet, Humankind and Life”:

“There is no worse aggression against Mother Earth and her children than war. War destroys life. Nothing and nobody can escape war. Those who fight suffer as much as those who remain without food just to feed the war. Land and biodiversity suffer. Thus, the environment will never be the same after a war. Wars are the greatest waste of life and natural resources.”

In President Morales’ writing of 2008 he cites a study made by Oil Change International, written by Nikki Reisch and Steve Kretzmann. This study focuses on the damage to Iraq in the first five years of war (2003-08).

“1) Projected total US spending on the Iraq war could cover all of the global investments in renewable power generation that are needed between now and 2030 in order to halt current warming trends.

2) The war is responsible for at least 141 million metric tons of carbon dioxide equivalent (MMTCO2e) since March 2003. To put this in perspective:

• CO2 released by the war to date equals the emissions from putting 25 million more cars on the road in the US this year.

• If the war was ranked as a country in terms of emissions, it would emit more CO2 each year than 139 of the world’s nations do annually.

Military emissions abroad are not captured in the national greenhouse gas inventories that all industrialized nations, including the United States, [should] report under the United Nations Framework Convention on Climate Change. It’s a loophole big enough to drive a tank through.”

The CIA reported in its 2006 Factbook that only 35 countries consume more oil per day than does the Pentagon. The US war machine destroyed millions of lives in its war against Southeast Asia and ruined forever 14% of Vietnam’s land. Today the US has 6,000 military facilities inside the country, and over 800 bases in 150 countries with a total of 1.4 million military personnel, plus tens of thousands of highly paid civilian mercenaries.

President Morales knows what the main cause of the wars against humanity and the planet is. His   first commandment is, “To end with capitalism”. “We know that in order to cure Mother Earth it is necessary to be conscientious that this disease has a name: the global capitalist system.

“It is not sufficient, not fair, to say that the climate change is just the result of the activity of human beings on the planet. It is necessary to say that it is a system, a way of thinking and feeling, a way of producing wealth and poverty, a pattern of ‘development’ that is taking us to the edge of an abyss. It is the logic of the capitalist system that is destroying the planet…the endless logic of consumption, of using war as an instrument to obtain markets and appropriate markets and natural resources…there are no objects sacred or worthy of respect.”

Evo speaks simply, clearly. If we wish to stop the destruction of humankind, of all life and the planet we must put an end to the “culture of trash and death” and create the “culture of life and peace”—so that all can live well and not so that a few can live materially better than others.

The warmongers of the Wall Streets and their parliaments tell us there is not enough money for a decent social network system, for adequate health care and education. They tell us we must cut back. Yet there is plenty of money for their wars, and plenty of profits for the rich. Profits soar in the US, in Denmark and most western countries in this period of Permanent War.

Under Obama’s regime corporate profits after taxes has grown 171%, more than under any other presidency since World War 11. Profits are twice as high as their peak under the supra neo-liberal Reagan regime.

The military-industrial complex garners extraordinary rates of profit. According to a study by financial advisory firm Morgan Stanley, shares in the major US arms manufacturers have risen 27,699% over the past fifty years versus 6,777% for the broader market. In the past three years alone, arms corporation Lockheed Martin has returned 149% to their investors, Raytheon 124% and Grumman 114%.

About one-third of the more than 1000 organizations involved in the climate actions around the world last September 21 agreed to a declaration on the causes and solutions to our crises. Among the better known groups are: La Via Campesina, ATTAC (France), and Global Justice Alliance (US). The essence of this statement was inspired, in part, by the people’s world conference on climate held in April, 2010, in Bolivia. It was called by President Evo Morales following the COP 15 disaster in Copenhagen the previous December. 35,000 persons came from 100+ countries.

I emphasize three of their 10-point action program:

1. Stimulate the transition from industrialized, export-oriented agriculture for the global supermarket to community-based production to meet local food needs based on food sovereignty.

2. Develop new sectors of the economy designed to create new jobs that restore the balance and equilibrium of the Earth system such as climate jobs to reduce greenhouse gas emissions and Earth restoration jobs.

3. Dismantle the war industry and military infrastructure in order to reduce greenhouse gas emissions generated by warfare, and divert war budgets to promote genuine peace.
I believe our most important task today is namely that which these environmental groups and President Morales indicate: we must unite our movements and fight with one strong fist.
———
A comment to Danish Readers regarding recent articles about the anti-war movement in Modkraft:

We must admit that the Danish peace movement has lost its strength as Jans Lars Nielsen and Rune Eltard-Sørensen wrote in Modkraft.

I believe we could do much better by:

1) Uniting the movements for peace and for a clean climate as argued above;

2) Using more tactics than the usual trodding passively through a few streets to hear (and not hear) a few speeches and then home again until another such non-event half-a-year or year later. A “movement” doesn’t require a definite number of activists, but admittedly more than we have today. For there to be a movement there need be various forms of actions on a regular basis.

We need to revive civil disobedience actions; take our message out in clearly written and verbal forms to people where they are; make happenings, such as in front of Børsen (Danish Wall Street) and banks, confront the warmongers and their war machines.

By Ron Ridenour What a day! For me, it started END_OF_DOCUMENT_TOKEN_TO_BE_REPLACED