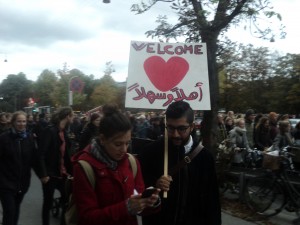 -What do you think about the latest refugee law which includes to take over the money and some jewelery of the refugees? What does this law mean politically?

– This is a national disgrace, and perceived as a new low by a large part of the Danes. If the quality of a society can be seen by its attitude towards the weakest – the old people, children, the unemployed, those of bad health, refugees – then Denmark is rapidly moving from a place at the top towards the bottom.

The inhuman and vicious attitude towards refugees is a part of the class attitude of the bourgeoisie and its state, and has become extremely poisonous by militarization, warmongering and the nurture of islamophobia. The caricature provocations of 2006 was also an expression of this.

Racism is an integral part of imperialist war politics, that in turn is the basic cause of the millions of refugees. Bombs do not create democracy or progress, but destruction and refugees.

The present right government headed by Lars Løkke Rasmussen, supported by the populist extreme right Danish People’s Party, is taking new steps down that road, even violating international treaties, born out of the experiences of the Second World War.

This is not so astounding. What is more astounding is that these inhuman laws have been supported by Social Democray, the contending party as leader of the government. After losing the elections in June 2015 the Social Democrats have adopted many of the policies of the populist right.

-What do you think will be the consequences of the application of this law among refugees and Danish population?

– The government wants to signal that refugees are not welcome and will be treated bad. Some of them are forced to sleep in army tents in the cold Nordic winter. They shall be prevented from having any hope of a tolerable existence, of creating af future. They want them to be placed in a limbo, called by number, not by a name.

At the same time the propaganda tells over and over again, that it is the refugees who are responsible for the cut backs of welfare and the austerity politics, while the real culprits are the neoliberal reforms and the theft and profit mongering of the capitalists.

The capitalists view a possibility of free or cheap labour power in the refugees. They must ‘work from Day 1’ as the slogan is now. That is they have to slave for the miserable shelters and their miserable daily allowances. They can be abused to lower the minimum wages of the workers.

The influx of refugees is proclaimed as a major ‘crisis’ even there have earlier been greater numbers coming from the wars in Europe during the last century without causing a deep crisis, such as it is claimed is the case at present.

Therefore the borders between Denmark and Sweden and the Nordic countries have been closed. For the first time in more than 50 years Nordic citizens need a passport and have to stand in lines to cross the borders. Transport time has increased. The border regions are economically adversely affected.

The present government considers itself a champion of the growing nationalist right of the European Union, which it supports. Including the efforts to fortify ‘Fortress Europe’ and the establishment of a ring of arms and police directed at the refugees. This double stand is quite logical.

There is no ‘progressive’ EU as opposed to ‘reactionary’ nation states.

-What is the response of the democratic community of Denmark before this new situation?

The official Danish stand and the reactionary laws creates divisions and upheavals in the traditional political camps. The progressive and left forces are strengthened, while the fascist and extreme right forces feel encouraged and supported by the official policy.

The response of the democratic and progressive forces has been significant and very strong, but has largely gone unreported in the international media. Tens and tens of thousands have taken part in repeated mass manifestations against these reactionary policies since September 2015, organized by such initiatives as ‘Refugees Wellcome’.

Local and regional networks of Venligboere (that is FriendlyPeople) have been established, seeking to assist refugees in the neighborhoods. More than 2 percent of the Danish population of a little more than five and a half million people have entered these very efficient networks.

Many have supported the refugees on their way, providing food, shelter, money and transport. More than 80 people are now facing sentences for assisting refugees in crossing borders without any pay.

There is a significant majority in the population against the plundering of the refugees of values, money and jewelry, although a parliamentary majority including the Social Democrats adopt such laws.

-How does the refugee problem of Europe discuss in Denmark? Also how does it affect the social situation of the continent?

– This of course is a question at the top of the political and popular agenda, because it is a prism of many political and social issues. Obviously it has made divisions and the fragility of the whole project of the European Union visible. It has not been able to carry out a unified policy or taking steps to solve the problems in a democratic way. It pays the Erdogan government 3 billion euro to prevent refugees from crossing to the European Union and keeps totally silent about the military campaigns against Kurdish citizens in Turkey.

The refugee question has at the same time demonstrated the narrowness and failure of the purely national ‘solutions’, trying to export the refugees to the neighbors, building new walls and border barriers.

The imperialist wars of this century in the Middle East and Africa have been catastrophic also to the warring imperialist countries. Obviously the refugees are used as the scape goat for the deteriorating social situations, but many workers, youth and progressive people understand, that the same forces that are responsible for the unjust wars also are conducting a class war at home, demolishing the rights and achievements of the social struggles, creating monstrous police states.

-Does the refugee debate affect the labour movements and organizations in Denmark and rest of the Europe? How?

– Only a minor part of the trade union organisations have taken a clear and progressive stand against the imperialist war politics and its consequences. In general they have contented themselves with promoting the illusory idea of a ‘social Europe’ to solve the present problems of capitalist society.

The idea of changing the European Union from within has suffered a fatal wound. The Syriza government did not change anything, but the people of Greece were chained even harder. The refugee situation further proves that the European Union and its development towards the United States of Europe by 2025 is not the answer.

In Denmark right now three partite negotiations about new labour laws and the refugee problem will begin. Between the state, the employers and the major trade union organisations.

The employers want to use the refugees as a labour force without having to pay anything at all. They want the refugees to exert a heavy pressure on the wages, pushing them further down. Real wages have been lowered for years.

This is a diabolic ploy, supported by the government and the social democrats. Unemployed and people receiving meagre social benefits shall be pushed further down towards the minimal level imposed on the refugees by the new laws.

Unfortunately the trade unions, led by social democrats, with a few honorable exceptions, especially in the public sector, have accepted the reactionary neoliberal policies.

The disillusionment with the trade unions due to their class collaboration that leads nowhere is getting greater and greater, calling for a radical change in the orientation and set-up of these organisations.

-Why do you think that the most progressive (in the eyes of the rest of the world) countries of the world could take such reactionary, even nazist measure before the refugee issue?

– Especially since 2001 Denmark has played a dirty role in international politics, reversing its traditional more progressive stands. It has been an eager participant in the imperialist wars in Afghanistan, Iraq, Libya and participates today in the sham war against Isil (Daesh), always trying to be in the front with the US.

These reactionary politics of war were established by the government of Anders Fogh Rasmussen, who later became the secretary general of the aggressive Nato-alliance. The other side of these politics were the neoliberal offensive against the ‘welfare state’, the result of the struggles of the working class and the fear of the ruling monopolist class of revolution and genuine socialism.

During the last decades and promoted by the Danish membership of the European Union the gains achieved in all social fields have been turned back. The Danish and Nordic welfare state does not exist as a model, proving that reforms under capitalism are not solid and lasting. That calls for another type of society.

A new resounding No from the Danish people (December 4th 2015)

The struggle of the working class against the war policy of the government, against the EU and NATO must be strengthened