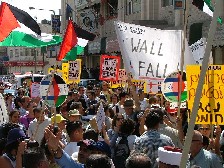 [A-Ram, Jerusalem] Today at 3:00 PM, Palestinian, Israeli and international peace activists gathered to protest the construction of the Israeli Apartheid Wall. Several clerics and MKs were also present for the demonstration. A march towards the current worksite of the Wall on the main road connecting Ramallah to A-Ram and Jerusalem began at 3:20 PM at Martyr¹s Square in A-Ram.

The nonviolent demonstration was scheduled to move towards the Dahiya checkpoint on the way to Jerusalem, but after 10 minutes, the demonstrators were met by dozens of Israeli soldiers and Border Police who fired rubber-coated steel bullets, tear gas and sound grenades well before the march exited A-Ram and approached the checkpoint. The tear gas scattered the demonstrators, but a smaller group of internationals, Israelis and Palestinians pushed forward towards the police. Upon approaching the police, the smaller crowd of demonstrators was pushed back by the police and sound bombs were thrown directly at the nonviolent protestors.

One canister of tear gas was fired directly into an ambulance providing medical assistance to the demonstrators. Several demonstrators were treated for tear gas inhalation, and one Yedioth Ahronoth photographer was beaten by police officers and lost consciousness before being treated by medics.

After the majority of the demonstrators were standing on the side of the main road away from the Israeli police, at least two Israeli Special Forces officers dressed in civilian clothes came into the crowd and began pulling several male Palestinian demonstrators from the crowd. With the assistance of the police officers there, nine demonstrators were arrested, several of them injured and beaten by the police.

According to Ha¹aretz, the Israeli military claimed that one Israeli protestor was seen throwing an axe at them and several others were seen throwing steel hammers. This claim cannot be verified by any eye witness at the scene. The demonstration remained entirely peaceful until the Israeli military escalated the situation with the use of bullets, tear gas and sound bombs aimed at the crowd of demonstrators.

The protest in A-Ram marks the beginning of Freedom Summer 2004 in the areas of Jerusalem and Ramallah. With the Israeli Supreme Court decision to be given on Monday, 28 June, the residents of A-Ram will remain strong in their opposition to the Apartheid Wall that is tearing their community apart. Demonstrations against the left and destruction of Palestinians land and the ghettoization of their communities also took place in Faqua-Jenin, Quffin, Tulkarem, Deir Qaddis-Ramallah.

For photos, see:
A-Ram demonstration against the Apartheid Wall

[Qaffin, Tulkarem] In the northern West Bank village of Qaffin (Tulkarem district), approximately 300 Palestinians and 45 international and Israeli peace activists gathered to march against the Israeli Apartheid Wall today at 11:00 AM. The demonstrators intended to reach the lands of Qaffin trapped between the Wall and the Green Line, and they were prepared to use any nonviolent means possible to get through a gate in the Wall, which in this section of the West Bank is a wire fence.

The Israeli military was alerted to this direct action and approximately 30 soldiers and police officers were waiting at the fence and within the nearby olive groves prior to the start of the demonstration. When the demonstrators reached a distance of at least 300 meters from the fence (and 50 meters from a military jeep parked in the road leading to the fence), the military reacted by firing over 20 canisters of tear gas and then rubber bullets at the protestors. After 30 minutes of unsuccessful attempts to reach the fence, the military announced that anyone touching the fence would be shot with live ammunition.

One Palestinian, Mohammed Sabbah, age 23, was shot in the neck by a rubber bullet and taken by medics to receive medical attention. Several others were treated for tear gas inhalation.

Approximately 6,000 dunams consisting of 1,010 olive trees lie trapped behind the Apartheid Wall, which is built one to four kilometers in from the Green Line in the area of Qaffin. This isolated land represents 60% of the total land belonging to Qaffin, and another 500 dunams were destroyed for construction of the Wall. Qaffin is an agricultural community, and those depending on access to their land have been left with one gate in the fence. However, access through this gate has been extremely limited.

The farmers have been told that they will be allowed only one time each year to get to their land ­ during the olive harvest. Earlier this year, 500 residents of Qaffin applied for permits to gain access through the gate, and one person was granted permission. 50 people then reapplied and all were denied permits.

In addition to affecting the farming community, the unemployment rate in Qaffin is approximately 80% as the addition of the Wall has made it impossible for the people that had jobs within Israel to continue their work.

While the people of Qaffin and the international and Israeli activists joining them did not reach the lands trapped behind the Apartheid Wall, they succeeded in voicing their opposition to the Wall and the Israeli Occupation and strengthening their struggle for freedom. These are voices that will ignite continued actions and protests in the areas of Qaffin and Tulkarem and will join all the voices throughout Palestine that will rise up during Freedom Summer 2004.

[Deir Qaddis, W Ramallah] Today at approximately 1:00 PM, 200 residents of the western Ramallah area gathered in solidarity with other demonstrators throughout the West Bank in the village of Deir Qaddis to peacefully protest the construction of the Israeli Apartheid Wall. Palestinians were joined by international peace activists as they marched to the land of Deir Qaddis being destroyed for construction of the Wall.

The path of the march led to lands that used to be home to the olive groves of Deir Qaddis, and the men and children wore prison numbers on their chests, symbolic of the prison created by the Wall. The march stopped at the top of a mountain recently cleared to make way for a water tower to be used by a nearby Israeli settlement. Here, the rally lasted 40 minutes. There was no military presence or current Wall construction, yet participation was enthusiastic.

Speakers included a 33 year old Palestinian man that had been imprisoned for seven months for using a bull horn at a demonstration to speak out against the policies of the Israeli Occupation. Today, he again used a bull horn to deliver his message.

The impact of the Wall will be great in the area of western Ramallah where five villages will be completely surrounded by the Wall in an enclave, separating the village residents from friends, family, schools and medical services.

Today¹s demonstration began western Ramallah¹s participation in Freedom Summer 2004, and more activities will be held in all villages of this area to join with all Palestinians in their effort to highlight the legitimate Palestinian freedom struggle being silenced and violently crushed by the Israeli Occupation.

Palestinians, Internationals and Israelis Come Together to Oppose the Apartheid Wall in Faqqua

[Faqqua, Jenin] Today, Israeli, Palestinian and international peace activists joined together in the northern West Bank village of Faqqua to illustrate their steadfast opposition to the Israeli Apartheid Wall. At 11:00 AM, approximately 200 Palestinians and internationals ­ the majority of them wearing numbers on their chests to symbolize the imprisonment caused by the Wall ­ marched together from Faqqua to the Wall on the eastern side of the village. They were joined by a march of tens of Israeli protestors on the other side of the Wall.

The two groups were able to communicate with each other in a rare moment of interaction between the isolated Palestinian population of the West Bank and Israeli citizens. Speeches were also given by Palestinian and international participants.

The Israeli military was present during the demonstration, but they allowed the peaceful protest to occur near the Wall. This symbolic demonstration in the area of Jenin was organized in conjunction with other demonstrations throughout the West Bank opposing the Israeli Apartheid Wall and apartheid policies that attempt to delegitimize the Palestinian message of freedom. Despite these attempts, the people of the Jenin district will continue to raise their voices against the illegal policies of Israel.