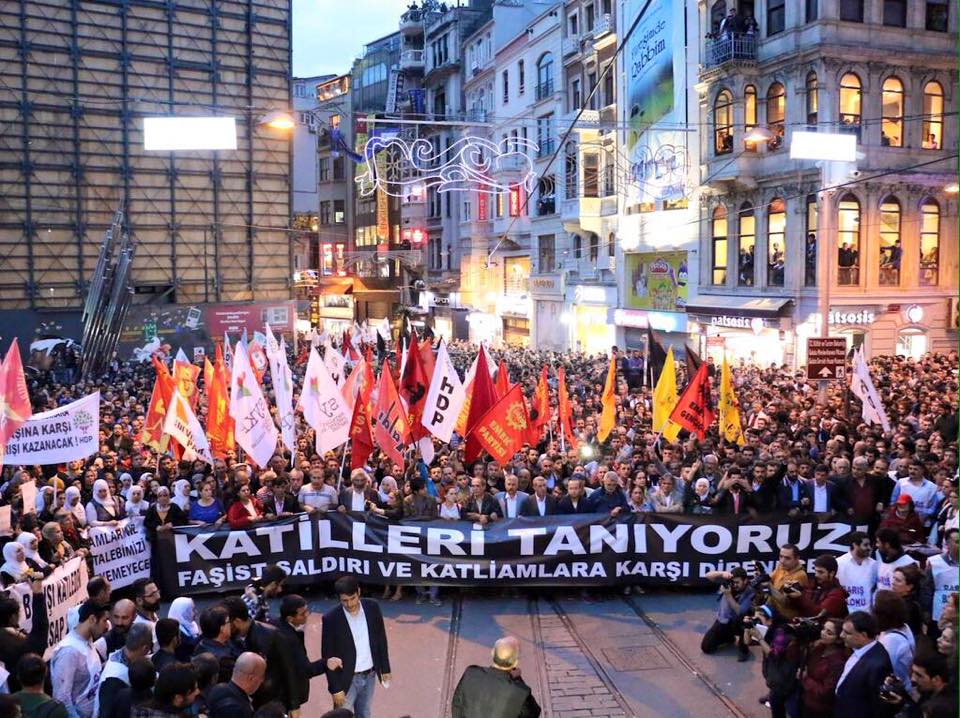 At least 95 people died and hundreds injured in a terrorist bomb attack on the ‘Peace Demonstration’ organised by labour organisations in Ankara. 16 of our Party members, including a member of our Central Committee are dead and tens of our comrades are injured.

Regardless of the name this attack has been carried under, the power behind this fascist terror and provocation is President Erdogan and the AKP, dragging the country into chaos and war in an attempt to continue their own rule.

It is the palace’s government of war and the MIT – security and intelligence services – that had under surveillance those who carried out the atrocities in Diyarbakir on 5 June and Suruc on 20 July but chose to do nothing. The aim of these massacres and provocations is to design a politics of fear among the working class and the peoples of the country and continue their rule.

It is clear that today’s struggle against this massacre, the attacks and the ruling palace/government of war behind it, has also become a struggle for the future of the country.

Fascist terror and provocations target all the peoples and forces of labour!

The Palace (President Tayyip Erdogan) and the government of war have long insisted on their politics of intervention in Syria by way of supporting barbarian groups such as IS and Al-Nusra.

While terminating the process of negotiations on the Kurdish issue; escalating conflict through curfews, special secure areas and sieges of cities; they are dragging the country back in to an environment of war.

Kurds that demand a unity based on equal rights, labour and democratic forces of the country, unions, media, workers fighting/striking for their rights and all public forces are targeted by this wave of attacks.

Furthermore, these attacks are carried out not only by the forces of government; gangs that were sent truckloads of weapons by this government in their fight in Syria are also used. This politics is turning the country into a ring of fire and into Syria.

Today is when everywhere is turned into a field of struggle against this wave of attacks!

The country is at a crossroads; we either surrender to the politics of the palace/government of war that will not hold back from ruining the country in order to continue their rule; or raise the struggle for a democratic future where, as workers and peoples from every nation, we will live together in peace and brotherhood.

As such, today is the day where we raise the struggle in all corners of the country to say ‘stop’ to those that want to continue their public-enemy rule through fascist terror and provocations. Today is when workers and people turn every factory, work place and neighborhood into a field of struggle for democracy against this wave of attacks.

Lets unite our forces to call the culprits of the massacre to account, to stop fascist terror and provocations; lets raise the struggle for democracy and peace with a call to general strike and general resistance!