For months the police and intelkligence agencies have claimed that Copenhagen would be a battlefield of raging violence during the EU-summit December 12th-14th. The demonstrations – with the major ones Saturday December 14th – totalling around 20.000 persons were focusing on the political issues and disciplined – and no violence, exept for what was created by the police themselves by provocations. More than 6000 policemen including a number of under cover agents, propped up as anarchist demonstrators, who acted as infiltrators and provocateurs, held Copenhagen in a tight grip.

The police cannot avoid winning: If there is violence, they will tell: We predicted it. If there is none, they’ll say: We prevented it.

The following photos tell another story. They are from the International Demonstration Saturday December 14th, where more than 10000 participated. The demonstration has left the Parliament and is marching through Copenhagen, when a group of undercover anarchist cops are spotted. 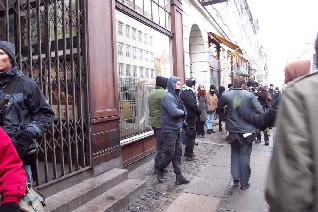 Undercover cops dressed as demonstrators – the three guys in blue, green and black (with a Palestinian scarf). One of them reacts to being spotted by reaching for his gun. Photografers from the demonstration starts to surround them

Photo 1a: Section of photo 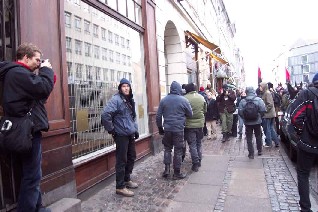 The ‘blue’ cop is reaching out for his club. 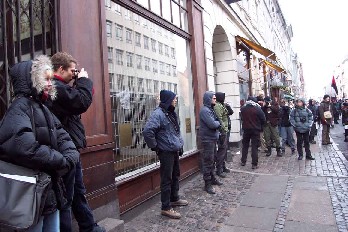 The four policemen line up – being surrounded by the demonstrators. The demonstration stops. They are reaching out again for their weapons. 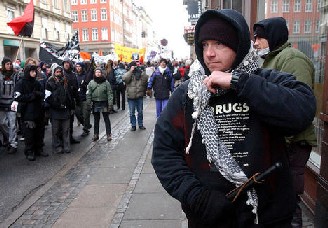 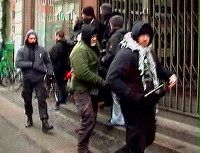 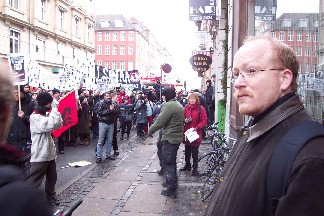 Moments later: The demonstration surrounds them. After telephone contact with police leadership they all leave the demonstration, followed by angry protesters.
Several episodes like this one took place during the demonstrations. Only the discipline on the part of the protesters prevented it from turning into a battlefield of raging police violence. 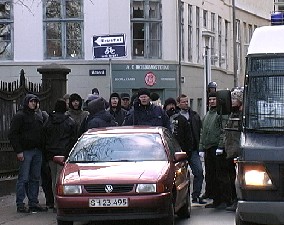