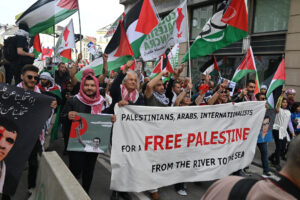 Once again we see a violent escalation of the state of Israel’s oppression of Palestinians. It is directed both at ordinary civilians in their homes and villages and at armed resistance fighters and groups. It is happening in the occupied areas of the West Bank, in Gaza, in Jerusalem and in Israel.

The recently concluded election in Israel, which has once again brought the reactionary Benjamin Netanyahu to power, this time in alliance with fundamentalist far-right Religious Zionism, will mean yet another escalation of the violent oppression of the Palestinians.

Among the many imprisoned and killed during the Israeli forces’ night raids and arrest operations are many teenagers and children. Israeli forces use collective punishment measures of residential neighborhoods and refugee camps. Armed settlers terrorize Palestinian communities across the West Bank, often in the presence and protection of the Israeli military. Israeli fighter jets have bombed the Maghazi refugee camp in Gaza.

We condemn the apartheid regime and its brutal suppression and repression of the Palestinian people’s protests and struggle for their rights and national liberation. It must be demanded that the Danish government stops its support and backing for Israel and condemns their actions.

The aggressive military campaign “Operation Dawn” has been met with widespread civil protests and civil disobedience campaigns and growing Palestinian resistance. The armed resistance is growing in response to the brutal violence against the Palestinians. There are reports of daily protests and confrontations with the Israeli military apparatus.

The brave Palestinian people have been fighting the Zionist aggression for more than 70 years. They continue their struggle for national independence, against the continued Zionist ethnic cleansing and colonization of the West Bank, despite facing a brutal occupation force armed to the teeth. A Zionist state held in power by US imperialism as its bridgehead in the Middle East. Which is supported by the imperialist EU and by Danish imperialism and its changing governments.

Facing this is a people fighting for its existence and national rights together with the international solidarity of workers and the peoples of the world.

Long live solidarity with the struggle of the Palestinian people!