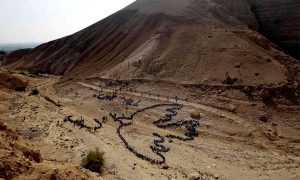 We had looked forward to seeing great works of art in Madrid, especially Picasso’s “Guernica”. But now after two intense days at our ancient ancestors’ settlements, staring at their tools and even their bones anything else seemed like an after climax. I dreaded returning to “civilization”.

Sure enough, just as we got off the bus at the Madrid station we saw several cops with machine guns and pistols drawn, and dogs, searching two Africans for something. I often hold an eye on such a confrontation to find out if the victims are underdogs or maybe guilty of something significant. Holding an eye on cops to register any brutality goes back to the 60s when we fought against police brutality and their racism. But this time with all our baggage, we decided to move on and take a taxi to the apartment room we rented in Lavapies (wash feet). And wouldn’t you know it, the cab suddenly stopped a few blocks away. The chauffeur was trying to get it started when a cop approach with machine gun drawn.

“You can’t stop here,” he said curtly. “You’re in front of the Ministry of Interior”, that is, his ministry, which controls all police and secret services. As he spoke the radio was reporting a terror attack in London. We caught a few words about what we soon learned was a one-man, 82-second attack on Westminster Bridge near the Parliament. Fifty-two year-old British-born Khaled Masood’s last message was that he would wage jihad against Western war-making in the Middle East. He drove his car through a crowd of people killing four and injuring 50. Then he ran towards the Parliament, stabbing a policeman to death before he was shot dead by another one. That news was immediately followed by a report from Brussels where a ceremony was underway commemorating the terrorist murder of 32 people and the injury of over 300 one year before on this day, March 22.