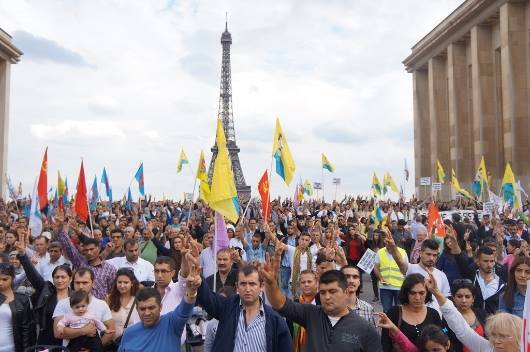 Iraq has effectively been divided into three parts after the US led occupation. Kurds have taken control in the North while the Shiites in the East and South and the Sunni Arabs in the West.

The power in Iraq has been shared between the Shiites, Sunnis and Kurds but the collaboration did not last long. Kurds virtually announced a free Kurdistan in the North. Sunnis complained from their lack of say in governance of the country and distribution of petrol, opposing and resisting Shiites, sometimes engaging even in armed struggle.

During this period, radical religious powers such as Al-Qaeda and Salafi Jihadists gained strength. These groups have been supported by Turkey, Qatar and Saudi Arabia.

Later, when the armed struggle supported by the imperialist powers - led by the US - against the government in Syria started, the Al Qaeda and Salafi forces in Iraq entered Syria and became the main force fighting against the Assad regime. They had the weaponry, the experience and a centrally led organisation while the FSA forces supported by the US were fragmented, disorganised and lacked any real experience of war.

The anti-Assad coalition led by Turkey, Qatar and Saudi Arabia as well as the US and the EU, have supported the Al Nusra Front that included Al Qaeda linked and other radical groups, believing that they had the power to defeat Assad. However, the practices of radical religious groups in Afghanistan, Pakistan, Libya, Egypt and Syria have disturbed the US and its allies. These groups, while serving the US and its allies on the one hand, tried to establish Sharia Law in their localities and caused damage to US interests on the other.

Following these developments, especially after the murders of US diplomats in Libya by radical groups and the events in Egypt, the US and its allies reduced the support provided to radical religious organisations in Syria.

Groups such as Al Qaeda, Al Nusra, Salafis, etc., upon realising they cannot defeat the Assad forces in Syria, declared their sovereignty and set up an ‘Islamic State’ covering the areas of Syria under their control and areas under Sunni Arab control in Iraq.

Meanwhile, taking advantage of the vacuum created by the fighting between the Assad forces and FSA and Al Nusra, Syrian Kurds have created three autonomous regions near the Turkish border in Northern Syria. The area controlled by the Kurds is called Rojava (meaning West or the West of Kurdistan in Kurdish). Kurds, having established their autonomous Cantons in Rojava, armed themselves, mainly against the attacks from radical religious groups.

Representatives of these Cantons have been arguing that governance was not exclusively Kurdish but Arabs, Yazidis, Armenians, Turkmens and other minorities and religious groups were sharing power and hence they created a democratic autonomous alternative. But it is clear that the PKK’s political line is dominant in the governance of Rojava. This line is represented by the Democratic Union Party (PYD).

The security of Rojava is under the domain of the armed People’s Protection Units (YPG) and the Women’s Protection Units (YPJ). YPG/YPJ have about 5000 armed members. Following the outset of the civil war in Syria, PYD has political and military control of the cities of Kobane, Afrin and Cinderas in the state of Aleppo; the towns of Amude, Derik and Efrin in the state of Hasaka, the cities of Darbasiyah, Resulayn (across Ceylanpınar in Şanlıurfa, Turkey) and the town of Tirbesipiye. YPG, the armed wing of PYD, have taken over the town of Resulayn from Al Nusra forces after an armed conflict and brought the tanks they seized from them to Kobane.

The three Cantons in Rojava do not share borders with each other. Assad Regime established Sunni Arab villages between Kurdish settlements. These are now under IS control.

About four months ago, IS armed forces have started their advance towards the east aiming for Baghdad. They quickly took over the city of Mosul, a major city in Iraq. In the areas of the advance and in Mosul, where Sunni Iraqi soldiers put up no resistance and handed their weapons over to IS. Some joined the ranks of IS and some fled to the east.

While IS was advancing on Baghdad, the Shiite leader of the Iraqi government was replaced, the US provided the Central Iraqi government with arms and military experts, and supported them with air strikes against IS. The IS reaction was to do a u-turn and advance on the Kurdish areas of Iraq and Syria. The Barzani forces of the Kurdistan Regional Government of Northern Iraq could not withstand the IS onslaught and retreated, abandoning their positions and weapons.

In Iraqi Kurdistan, the Kurdistan Workers’ Party (PKK) forces (which have been waging a war for 30 years against Turkey until the recent ceasefire) confronted the IS forces and managed to halt their advance in places. IS forces got closer to the Iraqi Kurdistan’s capital Erbil and the important oil town of Kirkuk and they overran the Yazidi city of Shengal. Tens of thousands of Yazidis fled Shengal and have taken refuge in Turkey.

The US support helped stop the IS advance on Iraqi Kurdistan and following this IS began to attack Kobane. It is now surrounded on three sides by IS forces in the east, south and west, except for the border with Turkey in the north. IS forces have tanks and heavy artillery while the YPG/YPJ forces in Kobane only have light infantry rifles. The elderly, women and children in Kobane have escaped to Turkey. Tens of thousands are in the town of Suruc in Turkey, camping in the open and going hungry.

Kobane wants arms to fight against IS. They want Turkey to open a corridor for them to bring tanks and heavy artillery abandoned in the Eastern Canton by the Iraqi Kurds and Iraqi military forces and seized by the YPG. IS forces are now within 1km of the YPG positions.

Our party and other progressive democratic forces in Turkey are staging demonstrations to get peoples’ support and force the government to help Kobane. Those that support the resistance go to Suruc in the Turkish side to access Kobane to bring in food and other supplies. They guard a 25km stretch of the Turkish-Syrian border to prevent IS militants filtering into Turkish borders and launching an attack from the north. Many Kurdish youth from Turkey cross the border into Kobane to fight against IS and support the resistance.

Meanwhile, the Turkish government has joined the US coalition against IS and wants to create a 40-50km wide buffer zone in Rojava, along the Turkish-Syrian border to settle the Syrian refugees that crossed the borders into Turkey during the civil war. The populations in this zone will be disarmed (hence PYD and YPG will lose control and influence in Rojava and the coalition forces, including Turkey, will defend the area against IS and the Assad forces). Later, an FSA army to be set up in this area to fight the Assad forces.

The progressive and democratic forces in Turkey stand against this plan. We oppose a buffer zone and the Turkish military crossing the border. We want Turkey to stop supporting IS and allowing its militants use Turkish borders. We want Turkey to support the peoples of Kobane and Rojava against IS attacks.

Our party believes that in the current situation international solidarity and support for Kobane is vital. We call on your parties and organisations and your peoples to support and show solidarity with Kobane and Rojava.

We think that solidarity with the peoples of the region against the imperialist plans and attacks is one of the most urgent political tasks.
Imperialism will lose and the victors will be the peoples.