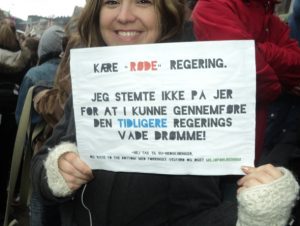 Workers are stressed about losing their jobs, about companies packing up and moving to lower wage countries, of being forced to accept wage cuts. This threat is real, in part, because of the capitalist-dictated borderless European continent. Workers from poorer countries are encouraged to come to the wealthier ones and take jobs for less than union wages. Migrating workers are often helped by employers to cheat on the social welfare system by not paying taxes. Teachers are stressed because they must use less time in class preparation and more time “baby sitting” and filling out forms thanks to a 2013 lockout forced upon 67,000 teachers by the Social Democrat-Radical Liberal-Socialist Peoples Party government.

Pedagogues of babies and small children also spend too much time filling out administrative papers, and due to cutbacks those remaining must care for too many children. College students have fewer scholarships, and have lost academic study opportunities because the government has eliminated “unnecessary” subjects to appease business interests. Many elderly and marginal persons are often stressed by racist/xenophobic political parties proclaiming that refugees-immigrants will take over Danish culture and religion, and commit terror.

A good example of how the government looks the other way when capital seeks greater profits at the expense of workers health is the current scandal concerning the German-owned Siemens Wind Power company. In the past decade, 64 workers have become seriously sick and disabled due to exposure to dangerous chemicals (epoxy and isocyanat).

The Danish Worker Environment Service and the Industrial Injury Board have allowed Siemens to operate without adequate safety controls, although they have known about the sicknesses. This decade-long “oversight” is so gross that TV news has covered the scandal, showing government officials acting bewildered about how this could have happened. A clear answer to such “bewilderment” is that one of the companies hired to oversee work security is a private concern, an outgrowth of deregulating industry.

Tidligere indlæg i serien
Scandinavia on the Skids: The Failure of Social Democracy

Scandinavia on the Skids: The Failure of Social Democracy – Roots to social democracy/capitalism, socialism (nr 1)

Scandinavia on the Skids: The Failure of Social Democracy – Sweden-Finland-Norway Globalization Blues (nr 2)

Scandinavia on the Skids: The Failure of Social Democracy – Sweden-Finland-Norway Globalization Blues (nr 3)

Scandinavia on the Skids: The Failure of Social Democracy – Iceland, this is where bankers go to jail (nr 4)