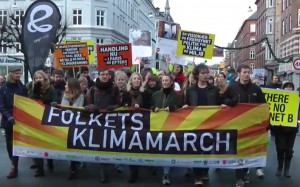 Colourful grass roots ingenuity spread throughout major streets in Copenhagen, November 29. We were between 10,000 and 15,000 of the million who marched in 175 countries at 2300 sites. Yet unbeknownst to me we were being “led” by a major politician of the economic-political Establishment responsible for the very pollution we oppose, and for the wars that murder millions, send more millions in flight, and pollute the planet.

My woman friend and I were not part of the planning but had participated in banner-making workshops by groups in which we are active—Tid Til Fred – aktiv mod krig, and Greenpeace—so we felt we could avoid the endless speakers words. We left after reaching the politicians’ palace.

We watched DR TV news. To our amazement we saw that the march’s keynote speaker was the very same politician responsible for coordinating the climate conference fiasco in Copenhagen (COP 15) six years ago. Milieu Minister Connie Hedegaard was the main culprit, and now she was “our leader”. The organizations’ leaders working for our planet had invited her. That’s like anti-war organizations inviting Barak Obama or Lars Løkke Rasmussen to lead a peace demonstration.

Hedegaard had been state minister Anders Fogh Rasmussen’s climate and energy minister before he won the top warmongering post at NATO, and then turned over Denmark’s nation’s reins to Løkke. She then acted as an agent for big capital and the Western governments during negotiations at COP 15 when these polluters met behind closed doors, keeping the Third World countries in the dark. That led to African delegates walking out of the conference with the support of several Latin American countries, and island states sinking under the rising ocean tides.

At the time I was one of two press attachés for Bolivia’s President Evo Morales, and assisted Venezuela’s President Hugo Chavez and three other progressive Latin American government heads. I heard these leaders speak of the subversive role played by the Danish government with Hedegaard at the top. The conference is well known for its dirty dealings and empty words.

For the record, Denmark is not as environmental clean as its reputation, which politicians like Hedegaard fabricate. Danes are the fourth largest consumers of energy, and emitters of CO2. If everyone in the world consumed as much energy—mainly fossil fuels—as Danes we would have to live on a planet 4.5 times the size of Earth.

Hedegaard has a long history of helping to subvert the planet and murder people. She was war spokesperson (“defense” spokesperson) for the Konservative Party of Denmark, in 1987. This party always votes for wars the US wants. She was even a recipient of the warring “Knight’s Cross of an order of Danneborg” (Denmark’s flag), in 2005. During her career as a minister between 2004 and 2009, she backed the wars against peoples in the Middle East and North Africa. Wars are the major cause of polluting the nature that she supposedly wants to protect.

The 2006 CIA factbook states that only 35 countries used more oil per day than did the Pentagon. An April 2007 report by a defense contractor, LMI Government Consulting, suggests that the Pentagon consumes as much as 14 millions gallons of oil per day. That translates into nearly 20 billion liters of oil yearly, more than Sweden consumes. This places the US Department of Defense as the number one consumer of petroleum, according to Michael Klare, professor of Peace and World Security Studies. Klare is also a defense correspondent for several magazines and a Human Rights Watch board member.
Tomgram: Michael Klare, The Pentagon as Global Gas-Guzzler

My major question is how do we prevent our organizations’ leaders from derailing our potential might by legitimizing the Establishment? On the march to Christiansborg, we saw a huge banner hung high over a lake’s bridge. It read: “Direct Action Now—We Need a Revolution!

” Our youth is the first generation to experience such extreme climate change, and it is the last to do something radical to turn that around”. 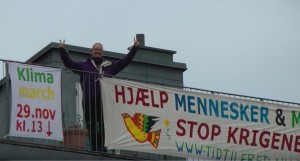