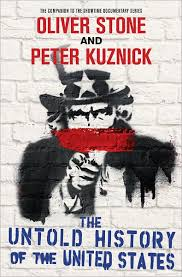 He presents reality from a factual perspective with an analysis from the eyes of the downtrodden. The series was premiered November 2012 in the US and is now being shown in Denmark by DRK every Friday at 20:00. As of this writing three parts have been sent.

Oliver Stone wrote the documentary with historian Peter J. Kuznick. The screenplay was written by Kuznick and Matt Graham. Stone narrates. US viewers saw it on Showtime. It took four years to make at the cost of five million dollars, of which Stone contributed one million.

He describes the documentary as ¨the most ambitious thing I have done.¨ The film covers US history from the World War 11. It delves into the reasons for dropping the atomic bomb on Japan, which was not the real target; shows the reasoning for the cold war, which was not desired by the Soviet Union; covers the changes in the US’s global role since the fall of communist rule and the emergence of the age of terrorism.

Its chapters are: World War 11; Roosevelt, Truman and Wallace; The Bomb; The Cold War; The 50s, Eisenhower, the Bomb and the Third World; Johnson, Nixon and Vietnam: reversal of fortune; Reagan, Gorbachev and the Third World: rise of the right; Bush and Clinton: squandered peace—new world order; Bush and Obama: age of terror.

The documentary is based on archival materials, video and audio recordings, historical citations, stock film and photographs, and clips from 60 fictional films.

In my opinion it should be used in schools throughout the world as part of learning what the United States stands for and how it impacts on the world.

In fact, the filmmakers started the Untold History Education Project, in 2013, to stimulate critical thinking amongst high school teachers and students in the US.

It can be bought as a DVD with a prologue concerning WW1 and with portraits of Hitler and Stalin. A book of 750 pages has also been published.

By Ron Ridenour What a day! For me, it started END_OF_DOCUMENT_TOKEN_TO_BE_REPLACED