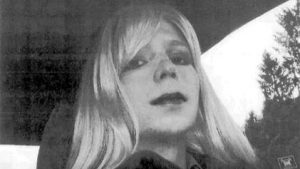 Tears flowed freely down my face as I told my partner that Chelsea’s imprisonment is commuted.

Contradictions galore! The jingoist nation’s most warring president just committed the one decent thing in his eight years of war-making against seven nations, conjuring up false enemies with competing capitalist states Russia and China, and harsh treatment against all the whistle-blowers during his contentious term.

During the US’s worst president’s first term, Chelsea Manning sent Wikileaks important secrets—secrets the world had every right to know—about how the US murdered and lied its way across Afghanistan and Iraq. Since then, Wikileaks’ initiator Julian Assange has been vilified and basically interned by the Obama regime, and its cohort governments in the UK and Sweden. Nevertheless, Assange-Wikileaks and Manning continue to inspire more Establishment workers to come over to the people’s corner, Edward Snowden among them.

We don’t know if the brave offer Assange made to US warriors—that he would turn himself over to their court system if Obama commuted or pardoned Manning—was a motivation for Obama’s action. But hundreds of Manning solidarity committees and civil liberties organizations have hammered away at the White House and the impervious Pentagon to release the heroine.

Chelsea’s photo looks at me as I write. Her commitment to truth and peace bring me back to my youth fighting against another of the United States hundreds of aggressive wars against innocent peoples. I knew Chelsea’s lawyer then, Nancy Hollander, when we struggled to stop the insane killing and torture against the peoples of Vietnam, Laos and Cambodia. Then, Daniel Ellsberg a predecessor to Chelsea, exposed war crimes and lies of the Nixon-Kissinger administration. His conscientious action, alongside hundreds of thousands of us in the streets, indubitably helped shorten the war.

I hope that Chelsea’s action, and her and our victory with her release soon, will inspire hundreds of thousands of us to return to the streets and demand an end of all this warring for profits and for US-NATO world domination.