Urgent call for international solidarity: Lift the siege of Silvan 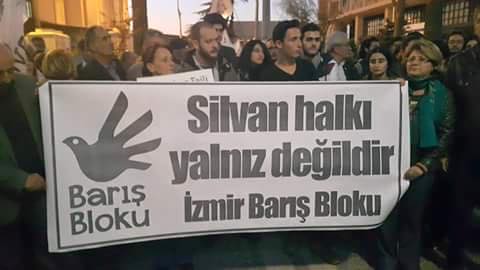 The Turkish government has abandoned the peace process which led to at least two years during which almost no-one died in clashes with security forces.

After the election denied the AK Party a majority in parliament, the violence increased massively. 33 young people on a humanitarian mission to Kobane were killed by a bomb in Suruç. As the death toll increased, some local authorities in Kurdish areas declared “autonomy” in order to protect their inhabitants.

The response by the Turkish government has been a series of attacks on these areas by security forces. 24 hour curfews are declared and soldiers and special forces police teams then attack neighbourhoods, placing snipers on rooftops and shooting anyone who emerges onto the streets. Many civilians, including women children and the old have been killed.


The latest of these attacks is in Silvan

Since 2 November the neighbourhoods of Tekel, Mescit and Konak in the town of Silvan in the province of Diyarbakır in South East Turkey have been under the occupation of Turkish police special forces and the Turkish army.

There is a 24 hour curfew. Civilians are unable to leave their houses for basic necessities, or even to take the wounded for medical treatment or bury the dead. People are hiding in basements while armoured cars roam the streets raking buildings with machine gun fire. Tanks have been located on surrounding high ground and are shelling these residential neighbourhoods. Helicopters have also been used to fire at the area. The numbers of dead and wounded cannot be accurately known, but are believed to include women, children and the old.

Ziya Pir, a Peoples Democratic Party (HDP) Member of Parliament elected from this area, reports that he attempted to intervene with an official of the Ministry of the Interior and was told, “We will wipe these three neighbourhoods from the map”.

“They are shooting indiscriminately everywhere. Soldiers, police and completely unregistered people, what I can only call ‘headhunters’ are raking buildings from top to bottom with machine gun fire. Tanks have been positioned overlooking these neighbourhoods. We cannot enter the neighbourhoods.

“Information we have from inside is that people are hiding in groups of 10-15 in the cellars of buildings. No-one can go outside, because there are snipers located on the roof tops. If they see even a shadow inside a house or any sign of life, they open fire. In previous operations there would sometimes be a break of an hour or two. Now shooting is round the clock without a break.”

Meanwhile that same government is engaged in indiscriminate slaughter of its own civilians. These attacks took place throughout the campaign for the recent election and are continuing after it. All the targets are areas where there were high votes for the HDP.

Please express your concern about these recent developments in Turkey.


To save lives, we need the security forces to cease operations against the civilian population and allow members of parliament and independent international observers access to these areas.

Send your communications to:

Please send the copy of your communications to: