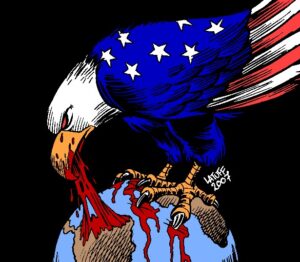 Under the guise of the inter-imperialist war in Ukraine, militarization and the influence of the US/NATO and the EU are dramatically increasing in the Nordic countries. This is taking place in an atmosphere of fear and uncertainty that the war in Ukraine and the 24/7 war propaganda have created.

The Danish Yes in the referendum June 1 to remove the former No to participation in the EU’s military process (so-called defence cooperation) was a majority of the votes cast, but less than half of those entitled to vote actually voted. The Yes is not a backing for more war and the military build-up of EU imperialism. It was made a matter of ‘for or against Putin’ by the political establishment, the bosses and the top leadership of the Trade Union bureaucracy and the state and private media.

In recent weeks, the Swedish and Finnish governments have applied for membership in the US imperialist military alliance NATO. Denmark, which is a member of NATO and the EU, now also becomes a member of the EU’s military build-up and apparatus. The Norwegian government is about to sign an agreement with the United States for US soldiers at military bases in Norway. The Danish government is on its way to making a similar agreement with the United States.

This is a dangerous development that is escalating the danger of war. The North has a strategic importance for control of the Baltic and Arctic seas in the increased rivalry between the imperialist big powers, the US, Russia and China.

It is a development that means increased military build-up for the benefit of the war industry. This means large increases in national, NATO and EU military budgets – to be paid for by the working class and people with new social cuts and deteriorating living conditions. It means another major sell-off of the sovereignty of the countries and their ability to pursue an independent foreign and security policy –dictated by the big monopolies and capital for which the strengthened military alliances of the EU and NATO must protect their investments and markets.

NATO Secretary General Jens Stoltenberg has made it clear that the US and NATO need a strengthened EU military union with increased war budgets, increased investment to strengthen the competitiveness of the EU war industry, and greater military capabilities and technological development in the EU, if it is under the control of US imperialism. At the same time, the EU has its own imperialist interests and purposes.

The Social-Democratic governments of Denmark, Sweden and Finland have once again proved themselves immensely useful as guarantors of the interests of the monopolies, warmongers, bourgeoisie, and imperialism. Through their traditional ties to the leaders of the Trade Union and workers’ movement, arm in arm with the employers, they have worked intensively for the participation of the countries in the imperialist military alliances, in direct contradiction to the national and international interests of the working class.

However, the people’s opposition is too big for the Social Democrats alone to have been able to stop it from developing in its full force. This has only been possible with the help of the opportunist parties supporting the Social-Democratic governments. The Left League, which sits in the Finnish government, is now in favour of NATO membership. In Sweden and Denmark, the governments’ supporting parties, the Left Party and the Red-Green Alliance, play a double game. They are officially opposed to NATO but have effectively and in practice abandoned this position. Instead, they have actively worked to curb, narrow and divide both the popular opposition to NATO membership and the struggle to stop the war in Ukraine and stop the governments’ war-prolonging arms deliveries and support for Zelensky’s regime. In relation to the Danish referendum on removing the former NO to participation in the EU’s military project, the Red-Green Alliance has played the same role. With a small lukewarm NO vote, only to secure their own place in the European Parliament on the votes of the opponents of the EU, the leadership of the Red-Green Alliance has effectively slowed down the EU resistance from being united and visible. Over a third of the population did not vote at all in this poll.

With the latest developments, imperialism – the US, EU and NATO – stands stronger than ever in the Nordic countries. There is no doubt that this is part of a comprehensive plan and coordination by those in power in the Pentagon and Brussels. Or that the left-opportunist parties have chosen sides in favor of the governments and policies of their bourgeoisie against the working class and people.

The government is hiding its reactionary economic and war policy behind a mask and demagoguery of “social peace – to ensure economic growth and peace”. But the consequences of this and the imperialist war in Ukraine are becoming increasingly clear – and not only regarding heating and electricity bills, which parts of the population have difficulty with or can no longer pay.

Crucial to the development of a broad popular movement is that these struggles and the struggle against the dangerous spiral of armaments, and the imperialist war and the danger of more war are closely linked to the demands of the working class and the struggle for better wages and working conditions, for more and better social, health and education conditions and the strengthening of the public sector. The need to develop the unity, consciousness, and organization of the working class in the struggle for political power is becoming more visible and urgent.

This implies that the political struggle against reaction, social democracy and other forms of opportunism must be developed in its breadth and depth, as must the line of class struggle in the Trade Unions against class cooperation with the employers, and the strengthening of international solidarity.

See more statements and articles in english from APK