The Party of Labour of Iran announces that its 5th Congress was successfully concluded. 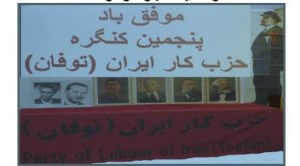 From the 5th Party Congress of PLI (Toufan)

No. 195 of the Central Organ Toufan carries among others the announcement of Party Congress, excerpts from the political report, a message for the workers of Iran and the message from the 5th Congress to the families of the fallen Toufani comrades. The PLI (Toufan) is working in illegality, banned by the Islamic Republic.

With militant fraternal greetings on behalf of the Workers’ Communist Party APK of Denmark and all its militants we send you are best wishes for the success of your important 5th Party Congress. The Party Congress is a major event in the life of every Marxist-Leninist Party – and yours is held in the difficult conditions of illegality of the Party due to the repression of the regime of the Islamic Republic.

You have not given up or given in to neither persecution, violence, jails or to the hardships of exile, nor to the ideological bullets of enemies of all hues, including reformist and revisionist ideas of class collaboration and conciliation with the oppressors. We admire your fine example of waging a protracted and principled struggle for the cause of the working class and people, for progress and revolution, in the context of the ever sharpened contradictions in your region, imperialist rivalries, war and fascist repression in the name of religion.

Based on a Marxist-Leninist class line you have also defended the aims and ideals of the popular revolution against the pawn of the US imperialists the Shah and the independence and sovereignty of Iran, refusing any kind of alliance with the imperialists. For decades the regime of the Islamic Republic has been repressing the social and political demands of the workers and the people, imprisoning hundreds of trade unionist, worker activists, teachers and students, ruling by force, terror and torture. It will rather betray independence and make deals with the imperialists than accept their just demands.

Your struggle for democracy, justice and freedom is showing the way to another Iran, a force of peace and progress in the region and the world.

Our struggles in different countries and continents merge into one revolutionary struggle against the predatory and war mongering forces of imperialism, presiding over a doomed and crisis ridden system. There is no relative stability anywhere. The European Union moves from one crisis to the next, as US imperialism moves from one war to the next. Revolutionary situations develop in countries in all continents, where the fundamental contradictions of imperialism constantly are sharpened.

Building strong Marxist-Leninist communist parties and a strong international Marxist-Leninist movement by strengthening the CIPOML is on the agenda today as an integral part of victorious revolutions. The period of so-called social peace in Denmark and the other Nordic countries has definitely come to an end.

Once more, we greet your Congress, expressing our confidence that it will solve all its tasks and work out a line of further advances of the Party and the Iranian working class and people.

Syria: The Defeat of the Aggressive Policies of the Western Imperialists
By PLI (Toufan), January 9 2016