The Defeat of the Aggressive Policies of the Western Imperialists, Headed by the U.S. and Allies in Syria

By PLI – The Party of Labour of Iran (Toufan) 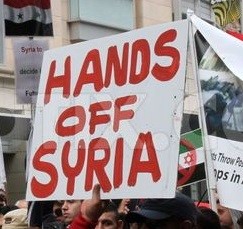 The imported foreign mercenaries to Syria, with the support of the western imperialists, have been destroying Syria and killing its people for five years. These mercenaries plant bombs in the centers of big cities such as Damascus and Aleppo and destroy the livelihood of the citizens. The western intelligence organizations have mobilized these mercenaries through Saudi-Arabia and Qatar and have imported them to Syria. Their identities have been revealed to be a mixture of Al-Qaida, the Moslem Brotherhood, and the Salafist Movement. They are mobilized from Libya, Saudi-Arabia, Qatar, Dubai, Afghanistan, Jordon, Tunisia, Egypt, Chechnya, Lebanon, China, and so on. There are reports that members of the Organization of Mujahedin of Iran are involved in the West’s imperialist intervention in Syria. The role of Turkey in the financial and spiritual support of Daesh (IS-ISIS) and the Syrian reactionary opposition are not hidden from open eyes. The situation is so anarchical and messy that even some imperialist countries fear to send military weapons to this opposition because they do not know precisely who will be receiving the weapons nor to what use those weapons might be put.

The so-called opposition tries to seize areas inside of Syria with the hope of establishing a “free zone” and declaring itself as “the legitimate government of Syria” in order to become a haven for destruction and criminal actions in the region. Turkey and Jordan attempted unsuccessfully to assist the “opposition” in achieving these goals. The situation has become so backward that even some reactionary and puppet regimes of the region have recognized the sellouts and have discredited the opposition’s self-proclaimed “legitimate government” as a king without crown or throne.

The “Free Syrian Army” has been dealt a heavy blow in all the areas under its control. The Syrian government has brought about the ruin of foreign mercenaries by mobilizing the people and organizing people’s militias. The situation increasingly favors the despotic regime of Syria. Assad’s government is defending the principle of national independence, territorial integrity, and national sovereignty of Syria. This defense is legitimate and is recognized by revolutionary and democratic forces. Foreign imperialist forces and their allies have no right to install a government in Syria, or in any other nation for that matter.

The imperialists were caught up in the false assumption that they could overthrow the government of Syria overnight by creating an atmosphere of fear and terror and by using their agents to generate chaos to enable a velvet revolution. The imperialists thought that they could topple Assad as quickly as they toppled Saddam Hussein who governed by authoritarian means through the Iraqi Baath Party. Imperialists and Zionists have invaded so many states of the region that they thought they would be able to carry out a military invasion of other states too. The policies of the imperialists and their allies faced disgraceful defeat in Syria.

Assad’s resistance to the criminal activities of the “opposition” continued, and the Syrian administration and army, despite the presence of spies and infiltrators in the government, remained firm. The Syrian administration feared neither threats, or terror, or spies, nor sellout agents. The government of Bashar Assad did not disintegrate as the imperialists and their reactionary and criminal “opposition” had hoped. The administration gained in strength and confidence as the jihadists continued their terrorist activities; at the same time, the sellout opposition became apprehensive and disunited.

The recent Russian attacks, performed at the request of the Syrian government on the terrorist bases of the cannibalistic Islamic State of Caliphate, have played a positive role in preserving the existence and territorial integrity of the Syrian state. These attacks neutralized the sinister western imperialists’ plot to topple Assad’s regime and to strengthen reactionary regimes of Saudi Arabia, Israel, and Turkey. The Western media’s false propaganda about Russian airstrikes “targeting and killing innocent people” are greeted with well-deserved scorn in the progressive communities and further denounce U.S. and other Western administrations as the so-called “defenders” of human rights. The Russian airstrikes in Syria have exposed the U.S. imperialists and their allies who have pretended to oppose terrorism in Syria. Before the beginning of the Russian airstrikes in Syria, the U.S. authorities repeatedly announced that the war against Daesh (IS – ISIS) would occupy up to thirty years!

The Western imperialists are not motivated by a fight against terror, nor are they interested in eradicating the medieval and cannibalistic Daesh; rather, their goal is to overthrow, for their own self-interest, the secular and independent government of Syria. The Russian airstrikes have targeted the training bases of all terrorist forces regardless of their names or masks. We cannot divide terrorism into “good” and “bad” factions. The U.S. imperialists use the “good” terrorists as catalysts and give them military training in the CIA camps in western Syria and then send them to big cities to join the “freedom” fighters. This scheme was broken up by Russian airstrikes on the terrorist-producing regions.

We must mention that some sections of the Syrian national opposition have drawn a political line between themselves and the foreign mercenaries whose aims have been to create terror and chaos in the country. This democratic and progressive opposition correctly recognizes that the defense of national independence is of utmost importance and outshines the other social contradictions.  The clock is ticking against the old colonial West. The task of the progressive forces is to direct the fight against ISIS terrorists, to curtail the imperialist military aggression of the West, and to defend Syria’s national sovereignty and its territorial integrity. Under these circumstances, the communists of Syria can help to resolve their country’s internal class contradictions – not by resorting to reactionary measures or by engaging in a Trotskyite fight against Assad and Isis – but by rallying around the flag of anti-intervention and by repelling imperial-backed terrorists. By learning from the disastrous situations in Iraq, Libya, and Afghanistan, a catastrophe against the Syrian people can be averted, and the Syrian working class can be prepared for and directed towards a socialist revolution.

It is worth mentioning that a section of Iranian opposition follows this Trotskyite line of a “fight against two poles.” This promotes the formation of a “broad front to overthrow the regime” if and when Iran is attacked or invaded by the U.S., Israel, or NATO. The sellouts following this strategy side with the imperialists against the Islamic Republic. It is necessary and important that people know about and expose these pro-imperialist organizations.