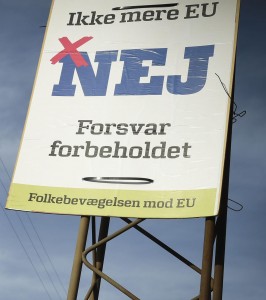 Poster of the People’s Movement Against the European Union

It was a victory for the people against the ruling class and the establishment of the European Union, when the Danes voted a resounding No to more supra state integration on December 3rd 2015.

This means that Denmark not automatically will be a part of the suprastate Europol and legislation on criminal and civil affairs will remain in the hands of the Danish parliament.

It was the third time, the Danes voted a clear No to the building of the European Union. They said No to the Maastricht treaty in 1992, No to the Euro in 2000 and No to a change of the status of Denmark in 2015.

– The people voted against the establishment and the coalition of political parties, the employers and the bosses of the trade unions, who hand in hand told them to vote yes, says Dorte Grenaa, chairman of the Workers’ Communist Party of Denmark APK.

The No vote was not a vote of the political right, but of the people. The broadly based People’s Movement against the European Union, that is represented in the European Parliament, was also this time a decisive factor in the success of the No-campaign.

Now the Danish political elite is going to interprete and twist the result. But a No is a No. Also the third time around.

The British people are going to have a referendum later on whether to remain in the European Union on new terms or leave it. This  Danish referendum will influence on this situation and on the resistance against the proces of ‘ever more union’ of the EU.

On the Danish referendum December 3rd 2015