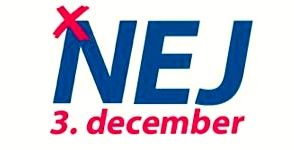 The pro-European Union parties in Denmark have called a referendum on December 3rd. 4.2 million people can vote Yes or No to a change in the status of Denmark in relation to the European Union.

The pro-EU parties want the Danes to integrate into the European Union in all areas, preparing for the ‘United States of Europe’ that is planned for from 2025.

This is the 8th referendum held about the EU, EU treaties or aspects of the relationship towards the European Union since the first one in 1972 about entering what at that time was called the European Economic Community (EEC).

In 1992 the Danes voted No to the Maastricht-treaty and the plan for the building of new stages of the economic and political Union, including the introduction of the Euro.

In order to make the Maastricht Treaty be adopted for the whole of EU a number of exemptions for Denmark were negotiated and adopted, that were accepted by another referendum in 1993, that also passed the Maastricht treaty.

These four exemptions concerned military cooperation, police cooperation and legal structures and legislation on crime and civil laws, monetary union and socalled ‘European citizenship’ and are still in force.

Since that time the pro-EU-partiers – that include all governments of the period, whether openly reactionary or social democrats, have tried to get rid of these exemptions but without success.

In 2000 they tried to have Denmark adopt the Euro and the economic and monetary union, but failed. The No-vote won again.

15 years later they try to remove the legal and juridical exemption. The pro-union parties have formulated the question for voting in such a way, that it does not explicitly says yes or no to preserve the juridical and legal exemption, but that is the whole idea and intention.

If there is a majority the three other exemptions will be be put to a referendum, as demanded by the Danish constitution concerning passing over of sovereignty to suprastate organs.

One of the reasons for the referendum being held now is that the Europol is transformed from an interstate collaboration into a supra-state institution as a part of the construction of the EU state, as a kind of FBI of the European Union.

The No-parties include the Peoples Movement against the European Union, the Unity List (member of the European Left Party) and two bourgeois parties, supporting the present right government of Lars Løkke Rasmussen. One of them is a neoliberal party, the other is the xenophobic Danish People’s Party.

The NO-parties and movements argue very differently about why it should be a No – but agree on one thing: No to more European Union, No to giving up more sovereignty.

The entire Danish elite, the employers and the top bosses of the Unions, have been together in saying Yes, strongly supported by the bourgeois media. The No-side has relied mainly on their activists, the internet and the social media.

In the end the result will be decided by the weight of the worker’s vote. A No is within reach. Opinion polls have been recording a close race.

APK – the Workers’ Communist Party of Denmark – has been campaigning strongly for a No, leading its own campaign directed towards the workers and the youth, and actively supporting the campaign of the Peoples’ Movement against the EU.

In connection with this campaign it launched a completely new version of the website of the central organ Kommunistisk Politik on December 1st.

It can be seen here
http://kpnet.dk/

The struggle of the working class against the war policy of the government, against the EU and NATO must be strengthened

The work of the party in the working class, the workplaces and trade unions