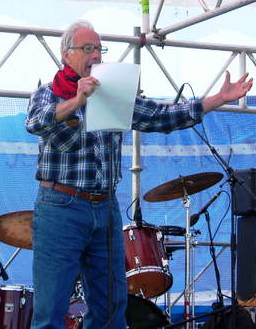 Imperialism, being the outward extension of capitalism, needs wars in order to divert attention away from its internal problems and the ensuing complaints and protests lodged by workers and students, also, of course, to expand its wealth and global territory under the control of fewer and fewer transnational corporations.

If one is opposed to imperialism and its wars, one must think and act as an internationalist. Internationalism is simply cooperation/solidarity among peoples who are oppressed and exploited, and/or repressed by profiteers and their state governments, such as this state and its allies in the EU, the US and others.

Internationalism has been associated with the concepts of socialism, communism, anarchism with roots back to, at least, the first of May, 1884 when the U.S. Federation of Organized Trade and Labor passed a resolution declaring that, as of May 1, 1886, an eight hour workday would be the full and legal workday for all U.S. workers.

On May 1, 1886, workers took to the streets in a general strike throughout the entire country to force the ruling class to recognize the eight-hour working day.  In what they would later call the Haymarket riots, during the continuing strike action on May third in Chicago, the police opened fire on the unarmed striking workers at the McCormick Reaper Works, killing six workers and wounding untold numbers. An uproar across the nation resounded.

On May 4, Chicago members of the anarchist International Working Peoples’ Association organized a rally of several thousand workers at Haymarket Square to protest the continuing police brutality. A bomb exploded, killing seven cops. The police opened fire on the unarmed workers; many killed and wounded. Eight anarchists were arrested on charges of “inciting riot” and murder.

Where capitalism is most advanced and where workers have been militant in class struggle they have achieved the 8-hour work day and then the 7.5-hour work day. But many unions are bowing to the bosses, accepting longer work hours at less pay.

I read in Danish what I wrote about Denmark’s richest capitalist and a stalwart anti-union boss who died without unions telling the truth about him.

AP Møller made lots of money by supporting US-NATO imperialist wars, especially the latest ones where many of his ships were used. He and his shipping company, the largest in the world, is a good example of how capitalism needs imperialist wars as they also crush collective bargaining.

In the Social Democratic and Union part of the park today all the so-called red parties are celebrating their recent electoral victory, in which they join forces with the AP Møllers. Among the speakers today is the head of the national unions, LO, Harald Børsting. One decade ago when he was LO’s ideological leader, he broke ranks with the working class and turned his back on solidarity with anti-racism by embracing the main racist party in parliament, the Dansk Folkeparti.

I read what I wrote about this at the time. It was printed in Ekstra Bladet and in the key union magazine Fagbladet. “LOs Forræderi”
(Extra Bladet 29. Januar, 2002; anden version i Fagbladet 8. Februar, 2002)

A decade later the self-declared socialist party, Unity Party (Enhedslisten)—which was started by the Communist Party, one of several Trotskyist parties, and the Left Socialists—joins hands with this racist-neo-fascistic-war party in tactical unity. EL even supports capitalism and its wars by signing the government’s capitalist financial package that includes funding the war against Afghanistan as well as continuing its presence in Iraq and Yugoslavia.

EL had already dropped its anti-war stance and left the anti-war movement. EL also supported the US-NATO war against Libya last year. And EL now speaks well of DF’s main financial supporter, AP Møller.  When he died, Frank Åen, who was a key speaker for war against Libya, offered his “RESPECT” to this enemy of the working class, this passionate lover of wars. How disgusting!

What is it about leftist parties that gain seats in capitalist parliaments and then abandon any decent political program, even drop solidarity with oppressed peoples especially when they pick up arms to fight for liberation, or when they are invaded and defend themselves with arms? There are even so-called political parties not in parliament that support the imperialist warring Iraq Communist party.

I think it is because reformism has taken over from revolutionary politics and reformist politicians are not indignant. They seek a piece of the cake. They have lost hope and faith in the working classes and fear the oppressed for their passion and indignation.

One lesson to learn from this is to work in the unions, at the job places, in the schools and leave the parliaments to the capitalists. If a leftist organization wishes to run candidates as part of its strategy of struggle, it should do so with the purpose only of using the parliaments as an organizing center, a speaker’s podium and not to shake hands with capitalists, warmongers and racists.

While the political party terrain looks grim, there are a few grass roots activities we can join and feel positive about. One of the most important is the anti-fascist, anti-racist groupings and actions. We were 5000 marching strong in Århus last March 31 against the growth of anti-Muslim racism with its roots in fascist groupings in England and spreading to ten countries of Europe including here.

But beyond marching from time to time, we need to be active on a daily basis. We need to support the young activists in Århus who are under physical attack by these racist-fascists. We need to kick ass!

We must not let them exist in public. And we must take up the anti-war banners again. We must join with the only anti-war group still active, Fredsvagten.