A fascist onslaught in Norway has killed close to 100 people, targeting the political engagement and organization among progressive and democratic youth in particular 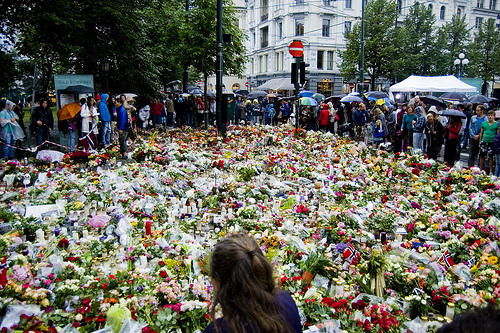 Norway was on 22nd July 2011 site of the worst terrorist attack in the Nordic countries since the Second World War, perhaps the most systematic slaughter of young people in recent history.

The death toll is approaching 100, of which 85 are young people who attended the summer camp of AUF (The youth organization of the Social Democratic Labour party).

Now we know that it was not fanatical Islamists, but the blonde, conservative westside boy, business founder, freemasoner and former Progress Party member Anders Behring Breivik (32) who was responsible for the bomb in Oslo and the massacre of 85 young AUF-ers on Utøya. A crime he has now confessed to have committed.

Even if it turns out that he has carried out the deed on his own or only with a few aides, Anders Behring Breivik not an isolated and random vermin. This crime has been carefully planned over time, and neither the ideas nor the methods have been invented by Behring Brevik himself. His inspiration has evidently come from a series of bloody attacks carried out by the Christian-fascist terrorist groups in the United States, actions directed at federal buildings, abortion clinics, and school massacres carried out by individuals.

More and more evidence supports the fact that he has been part of an extremely reactionary and islamophobic environment who use the Internet in general and a Norwegian site in particular,  www.document.no, as their main breeding grounds. Through sites of this type they have spread their hatred and incited one another, as well as the active use of discussion forums in the “serious” online media. Breivik, although he poses as anti-Nazi and pro-Zionist, is also reported to have been a bouncer for Nazi organizations and linked to the fascist EDP; European Defence League.

Besides a wildly racist hatred against Muslims and all the “Marxist-humanists” who defend immigrants and refugees, this environment has constructed a conspiratorial conception of the official ”political correctness” Norway, represented by the country’s political government, which supposedly acts as a compact majority in relation to the “national” and “patriotic” hate statements of Breivik and his likes.

As the summer camp at Utøya (an island some 50 km off Oslo) was the main target, it is fairly obvious that this is related to the distinct anti-racist profile of the AUF [the largest and most influential political youth organization in Norway – translator’s note], alongside with the AUFs close connection to the political center of power.

A Templar against Islam and Marxism

Breivik has recently published his detailed plans on the web, according to Dagbladet and TV2 . Freemasoner member Breivik regards himself as a Templar Knight and crusader who is spearheading the struggle against Marxism and Islamism. Nevertheless – or precisely for that reason? – Breivik has never come under the searchlight of the police intelligence agency PST, which for years has been so tightly focused on the Islamist groups in Norway that the simmering racist networks have been more or less ignored. Police and military terror experts present the Islamophobes as “something quite different” than the violent Nazi groups, claiming that the distance between Breivik hateful statements and actions he has committed was so great that there was no need to suspect him. That is an explanation that does not hold water, especially as anyone with minimal knowledge of these reactionary communities know that part of the Nazi community have restyled their appearance in order to make themselves more pallatable; they are even willing  to “distance” themselves from Nazi ideology if deemed necessary in order to cooperate with or infiltrate other so-called “national” groups.

Although Breivik’s views are on the most extreme side, it is also a sad fact that Norwegian “patriotism” and hateful statements about Muslims commonly is spewed out also amongst ”Main Street Norwegians”, especially when in party mood after a number of pints. We should not cover up the fact that there is a huge undercurrent of racist attitudes that systematically are amplified and inspired by the media and politicians from most parties. This has been the reality every day since the “war on terror” began in 2001. The pretty words of “inclusion” and “tolerance” is of little help when the reality is that particularly refugees, but also well-established immigrants, are encountered by the police and authorities by means of criminalization and harassment. For a number of refugees  the ”tolerance” is experienced in form of forced displacement and expelment from the country, even in violation of UN humanitarian principles.

The attitudes of the Norwegian society is built more on what the political elite and its bureaucracy does in practice, than by what they say in their speeches and their formal addresses.

The massacre should be an awakening

Non-European immigrants and refugees in Norway can now breathe easier. During the afternoon of 22nd July, in the hours after the explosion by the Government building, but before the shooting on Utøya became publically known, an ominous atmosphere was building up. In the media’s editorial boards, the conclusion was already on the desk, but not yet printed, that this was a terrorist act committed by extreme Islamists. The spin-doctors of the Progress party (Fremskrittspartiet) were polishing their media strategy for how to sledgehammer asylum seekers and Muslims in general, and thus reverse their declining opinion polls. Hate messages directed against Muslims flourished in thousands on Twitter and Facebook throughout the afternoon this fateful Friday. We hope that these ”twitterers” are strangled by their own false words and are vomiting in shame of themselves.

Considering the fact that this unimaginable tragedy actually has happened, it is, after all, better that the deed was committed by a Christian, Norwegian fascist and racist than that some insane jihadists were the culprits. This might be an awakening call for ordinary people, a backlash for prejudice and everyday racism, and perhaps it can also provide the basis for a political pressure to finally ban these fascist groups and communities who camouflage their criminal racism as a “national ideology”.

If racism and nazism is not crushed wherever it appears, the ground will continue to be fertilized for political fascist Templar Knights and mass murderers of Behring Breivik’s caliber.

Revolusjon has in another article expressed our sympathy with the AUF and the families who have lost so many of their young and loved ones. Today we stand beside AUF also because this is a direct attack on all political youth organizations, on all young people who engage themselves politically and utilize their democratic rights and liberties to discuss and express themselves.–