The present Danish Prime Minister, Anders Fogh Rasmussen, appears to be a likely candidate as the first president of the European Union. 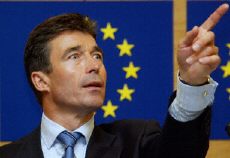 As Danish citizens and under present circumstances, we wish to recommend that this candidature be rejected. The Danish government has disqualified itself from such a central position within the European Union and within the international community as such.

Since its first election in November 2001, government policy has ever since been characterized by the policy of participation in war against a United Nations member state and subsequent military participation in the occupation of Iraq, despite the unwillingness of the United Nations Security Council to sanction such a step. To their great credit, a number of the non-permanent members of the Security Council withstood enormous pressure during this same period.

Danish military participation and occupation is also in conflict with the Danish constitution, but efforts to bring the question to court is constantly delayed by the present government and its Prime Minister.

The Prime Minister’s extreme alliance with and obedience to the policies of the United States is not a dimension that in any way can further the international and global policies of the European Union.

This is also due to the present government’s absolute reliance on a party of the extreme right, whose views have been declared as “racist” by the Danish Supreme Court. The cooperation of the Prime Minister and this party is in no way necessary as other parliamentary majorities are possible. It represents an attitude of the Prime Minister which in no way can become a general attitude of the European Union itself.

We would urge the European Union, its Ministers and its Parliament, not to endorse the candidacy of the present Danish Prime Minister as
a coming president of the European Union. There is need for candidates whose policies would be more attuned to international cooperation, to tolerance and civil rights, to equality and development.