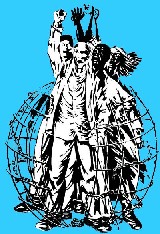 By Party of Labour of Iran (Toufan)

The US has, directly after its occupation of Iraq , been building up several military bases close to the Iranian border.

The US has made repeated demands on the Iranian government to accommodate to US policies concerning the “new American order”. Replacement of the regimes in Iraq , North Korea and Iran is, and has been, part of the Bush doctrine. Right now, as the US has failed in Iraq , its war-mongering against Iran is on the increase. The US has now dispatched two aircraft carriers to the Gulf of Persia and placed 50 warships just off the Iranian coast.

The US accuses Iran of possessing nuclear arms or of aiming at producing them. This is the hysterical US propaganda against Iran , in spite of the fact that all inspectors have declared that Iran has got no nuclear arms; those statements, however, don’t suffice for G.W. Bush. According to what the US dictates, independent nations have no right to develop peaceful nuclear power for civil use. The US dictate does not concern Israel , which is a nuclear power in the Middle East . Nor does it apply to Pakistan , or India , et al. What is being said, is that the Tehran regime must obey the US on the Palestine/Israel conflict; must not oppose US policies in the Persian Gulf on matters concerning oil; must accommodate entirely to the MAI and the World Bank, etc.

In short, Iran must unconditionally align itself with the US in the rivalry of the latter with the EU, Japan , and China . Can this be realized without any military intervention? Yes, that alternative might be possible. The capitalist clergy regime in Tehran has the character of selling out to the US for the sake of power. All factions within the Tehran regime have shown marked tendencies of compromise with the US . Examples of this are that the Islamic regime, during bombardments of Iraq and Afghanistan , has been collaborating with “the alliance Britain-US” and, according to its own statement, “the US wouldn’t succeed in Iraq and Afghanistan without help from Iran ”.

Iran was one of the first states to recognize the stooge regime in Bagdad . The Tehran regime has from the very beginning been acting against the resistance movement in Iraq , and has been close to the US line, while yet being accused of responsibility for the US failure in Iraq .

An invasion of Iran is, given the situation of huge US problems in Iraq and internationally, unlikely to occur. Nevertheless, the war-mongering is dangerously similar to the war-mongering that proceeded the invasion of Iraq. If it is not possible, in the end, to change the Iranian regime in favour of US desires, it might finally lead to a military action against Iran .

The US doesn’t care about the form or medieval character of the Iranian regime. History has shown that the US may collaborate with any kind of Satan to realize its aims and goals. Decisive to the Bush administration is that Iran chooses a pro-US line like Kuwait , Bahrein , Turkey , Qatar et al. The possible intrusion of US imperialism into Iran is of the same nature as its intrusion into Iraq , Afghanistan , Yugoslavia and other countries, and must be condemned.

The US has its imperialist political, economical and strategic interests, and no thinking person should believe that US meddling into Iranian affairs has anything to do with democracy, freedom or justice. That is nothing but sheer imperialist propaganda.

The people of Iran can, by its own might, overthrow the reactionary theocratic regime and build a free and democratic society without the “aid” of imperialism. Iranians are never going to forget the 1953 event, when Prime Minister Mosadegh was overthrown by a joint US-British action following his nationalization of the oil industry. The Shah was reinstated, oppression and terror became everyday features, and the democracy movement was drowned in blood.
One should not be blinded by the terror regime in Iran to forget about the colonial and barbaric aims of US imperialism.

US out of Iraq – immediately and unconditionally!

No sanctions, no bombs against Iran !